Why Dbanj was accused of rape – New reports reveal

As the rape allegation against Nigerian singer Dbanj continues to gain more attention since the intervention of the Police, new reports have emerged on why the singer was accused of the alleged rape.

According to Investigative journalist, Kemi Olunloyo, Dbanj’s former manager, Frank Amudo allegedly set the girl up with the singer, with the alleged plan to extort him over his new endorsement deal with Heritage Bank.

It was also reported that Frank was a known pimp for celebrities during major concerts and he was behind the accuser, Seyitan’s Twitter handle and made it appear as if Dbanj and his team hijacked the handle.

@seyitannn_ you are a LIAR young lady! I don’t represent @iamdbanj nor take sides. I defend media freedom and in my opinion you should confess because you have DEFAMED the musician and his family. I will now expose the facts on #Kemitalksrape YOU make it hard for victims.

@seyitannn_you did NOT tweet these allegations. Your friend who tweeted them for you on instructions of Frank Amudo, DBanj’s FIRED mgr. She contacted me. This is extremely fraudulent as you presented yourself as a RAPE VICTIM. @PoliceNGtake note. Those tweets now deleted!

@seyitannn_Just like @timidakoloyou used useless INUENDOS to get attention of an alleged rapist. Your tweet handler now ex pal turned the handle into a charade. You gave sympathizers the impression that DBanj’s team “hijacked” your handle. No evidence from @TwitterSupport

Dr. Kemi Olunloyo@KemiOlunloyo
· 19h
Replying to @KemiOlunloyo
@seyitannn_ you did NOT tweet these allegations. Your friend who tweeted them for you on instructions of Frank Amudo, DBanj's FIRED mgr. She contacted me. This is extremely fraudulent as you presented yourself as a RAPE VICTIM. @PoliceNG take note. Those tweets now deleted!

Dr. Kemi Olunloyo@KemiOlunloyo
@seyitannn_ Just like @timidakolo you used useless INUENDOS to get attention of an alleged rapist. Your tweet handler now ex pal turned the handle into a charade. You gave sympathizers the impression that DBanj's team "hijacked" your handle. No evidence from @TwitterSupport 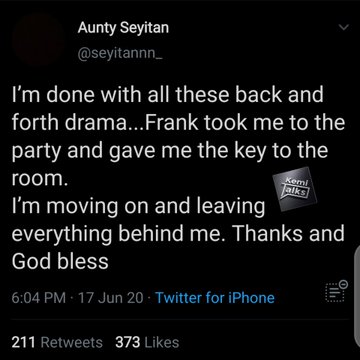 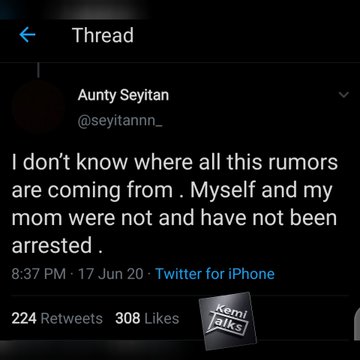 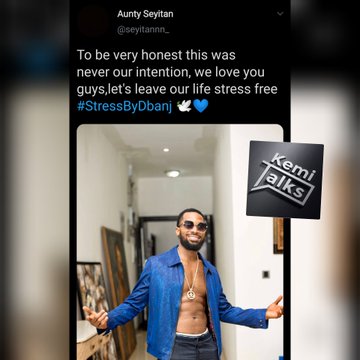 68 people are talking about this


@seyitannn_attended the police invitation last week on allegations of being raped and Frank Amudo’s lawyer reportedly present with her. However Frank was not present and is reportedly in hiding as the plan has collapsed. He is a close associate of DBanj and former manager.
Conclusions: The issue of rape of @seyitannn_came up because Frank Amudo wanted to seize the opportunity to extort money from @iamdbanjahead of his @heritagebankplcdeal and 40th birthday which is straight up wicked! DBanj contributed so much to his life as his Mgr

Conclusion: @iamdbanj was very kind and loyal to his former manager and even paid millions of naira for Frank Amudo’s wife’s fertility treatment when she was trying to have a child. It shocked Oyebanjo to find out why Frank wanted to use the issue of rape to DESTROY HIM

Conclusion: Many top music artists and an Abuja CEO that I interviewed said the Culture of hooking up groupies before and after concerts was Frank Amudo’s job and he always “organized girls” for DBanj and “did it well” One artist said Frank was literally “A pimp”

A popular human rights Activist who I personally know and spoke to AND WILL NOT MENTION the name who @seyitannn_said will “package” her story and fight for her backed out of her case DENYING such promise. The Activist reportedly noticed holes in her story and claim @PoliceNG

Finally @PoliceNG should invite Frank Amudo, DBanj’s former manager to come and tell his side of the story as it pertains to this alleged rape. He is said to be in HIDING. @seyitannn_’s mum attempted to reach out to DBanj to APOLOGISE but she was DENIED ACCESS! Family not happy

I’m done with the SECOND part of my Investigation for now. @iamdbanjsuspended from his @heritagebankplcC.R.E.A.M platform deal and also facing removal as a United Nations Youth ambassador. Up to 25,000 people have signed a “false” accusations petition. More soon.#kemiolunloyo
Tags
CELEBRITY

George Floyd and his killer cop, Derek Chauvin were co-workers at a club