Allen is the first publicly known NFL player with a confirmed case. New Orleans Saints head coach Sean Payton was the first known person in the NFL to test positive.

According to Glazer, Allen first tested positive for COVID-19 three weeks ago and did so again early last week. He first lost his senses of taste and smell, to the point where he could not even smell ammonia smelling salt. Allen then came down with flu-like symptoms.

The 24-year-old told Glazer that he is recovering and that his symptoms have cleared except for his senses of taste and smell. Allen also said that he expects to be given the “all-clear” from doctors Thursday.

“I cracked them open, put them to my nose and nothing happened,” Allen said. “All I could feel was texture in my mouth — literally, it was the only sense I had.” 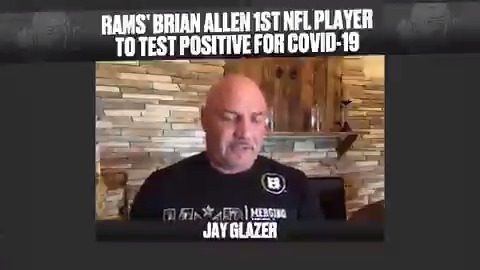 
L.A. head coach Sean McVay told Glazer he spoke with the former 4th-round pick this week and says he’s “feeling good, he’s healthy and he’s on the road to recovery.”

The Rams were forced to shut down their team facility for two weeks — but McVay praised his player for handling everything about the virus properly.

“He did a great job of letting us know right away,” McVay said, “so we could be timely in our response in making sure we didn’t expose anybody else to that.”