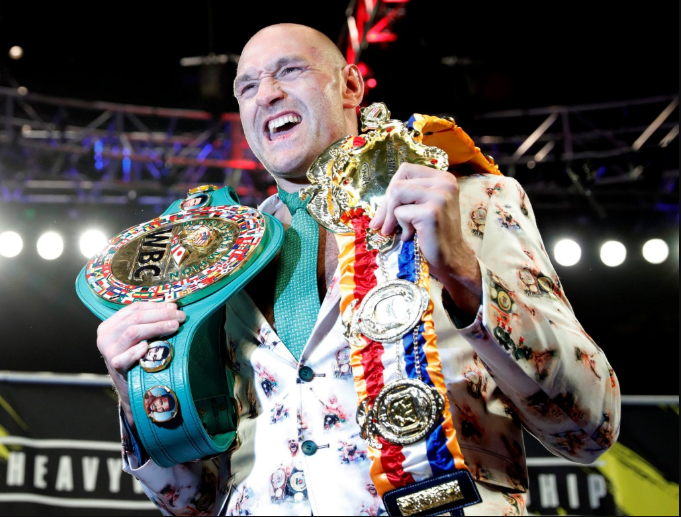 Tyson Fury has confirmed his plans to retire from boxing after two major fights.

The 31-year-old British boxer defeated Deontay Wilder just 11 days ago to become WBC heavyweight champion of the world. Tyson knocked down his American opponent twice before his team threw in the towel in the seventh round to end the bout.

Following the shocking defeat, Bronze Bomber quickly activated his rematch clause, meaning that there will be a summer trilogy fight between the pair.

Appearing on This Morning with his wife Paris Fury, the current WBC heavyweight champion of the world opened up on his future plans. According to him, after his rematch with Deontay Wilder, he'll take on Anthony Joshua and then retire from boxing.

When his wife, Paris called for him to call it a day on This Morning, Fury said: "I've got two more fights left, then we're going to really think about what we do from there.
"How long does a piece of string go on? I'm undefeated in 31 professional fights and this is my 12th year as a professional.
"I've already been the undisputed heavyweight champion of the world. When I beat Klitschko I had all the belts, so as far as I'm concerned Anthony Joshua just has my leftovers.
"I never lost those belts, I had to take time out to deal with mental health issues, so they're my belts. Until a man is defeated in a boxing ring, how can you pretend to be the champion?"
He also revealed that this time, he is better equipped to deal with the fame and pressure that comes with being world champion.

He said: "It's almost an anti-climax. You elevate yourself in mind and body to go and box at his level and nothing means anything apart from the fight. Then you win and it's like,

'Oh well, I've done that' and I slide down the other side. But I feel fine, I've learned over the years to maintain the mental health problems and to train on a daily basis and keep a routine.
"It takes me about two weeks to get back to normal after a massive fight.
"It is a rollercoaster of emotions, to be away from the kids and the school run and the screaming and shouting, it takes a lot to come back to that and get re-adjusted to that after three months away."