PDP writes UK, US and EU over Ihedioha's loss at the Supreme Court 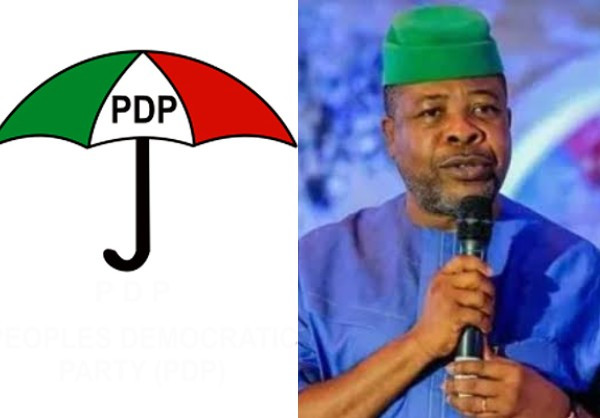 The People's Democratic Party (PDP) has written a petition to the United Kingdom, United States and the European Union after its chairman, Uche Secondus led a protest to the US embassy and the UK high commission in Abuja on Friday January 31, over Emeka Ihedioha's loss at the Supreme Court to Hope Uzodinma of the All Progressives Congress.

Senate Minority Leader, Enyinnaya Abaribe; former President of the Senate, Adolphus Wabara; former Imo State governor, Chief Achike Udenwa, as well as members of the National Working Committee (NWC) participated in the protest against the judgement of the apex court which sacked the Emeka Ihedioha as governor of Imo State.

In its petition titled ‘Perversion of Justice: Deliberate Efforts At Truncating Democracy in Nigeria,’ the PDP alleged that Nigeria's democracy is in danger as the judiciary has been compromised by the All Progressives Congress (APC) to pervert justice in its favour.

The PDP who called for a review of the court judgement, accused the Supreme Court of declaring additional votes (beyond the official number of accredited voters) from 388 polling units which was not certified by the Independent National Electoral Commission (INEC).

The petition reads in part;

“You may recall that our party, the PDP, the leading opposition party in Nigeria, has been raising issues regarding the continuous interference and arm-twisting of the judiciary by the executive arm and the ruling All Progressives Congress (APC) to influence the outcome of election petitions in various courts, annul elections won by our party and transfer victory to the APC.
“Your Excellency, it may have come to your notice that there have been serious protests in various states of our nation threatening the stability of our nation over a recent judgment of the Supreme Court.
“It is instructive to inform you that this perversion of justice has already sparked off protests in various parts of our country and has become a clear threat to peace, unity and stability of our nation and the survival of our democracy.
“We rejected the judgment with clear call for a judicial review and ultimate reversal of the judgment by the Supreme Court.
“Nigerians had been at a shock over the voiding of the lawful election of Ihedioha, who scored 276,404 votes and awarding fictitious votes to declare Hope Uzodimma of the APC, who scored 96, 458 votes as governor of Imo State that the Supreme Court voided.
"The Supreme Court declared additional votes (beyond the official number of accredited voters) from 388 polling units, not certified by the Independent National Electoral Commission (INEC) and donated same to the APC and its candidate to declare them winners. It added that the action of the Justice Tanko-led Supreme Court raises very serious issues about miscarriage of justice against the party and democratic order.
"The same Supreme Court in the most celebrated case of Atiku V Buhari & Ors, decided that for a petitioner to succeed in an allegation of infraction of any provision of the Electoral Act especially one complaining about malpractice, such as wrongful exclusion of votes, the petitioner must call witnesses polling unit by polling unit.
“However in this case, the same Supreme Court was not presented any witness from Uzodinma/APC from the fictitious 388 polling units from where the court allocated votes to him. Does the Supreme Court have powers to formulate and allocate votes as election results?
“The so-called results from the 388 polling units were rightfully rejected, in line with several decisions of the Supreme Court, by the tribunal and Court of Appeal as it was merely dumped on the tribunal in a bag, by a policeman who had no mandate of the police to testify at the tribunal.
“The tribunal did not even open the bag as there was no basis to do so. It is one of the great wonders of the world how the Supreme Court opened the bag, counted the results and added them to only the APC candidate.
“What is more perplexing is the fact that INEC produced a schedule of reasons why results were not produced from the 388 units.
“Indeed, election did not even take place in most of the units for one reason or another, like violence among others and so no result could possibly be obtained from those units. The results were not merely rejected or cancelled by INEC.
“Moreover, your Excellency, nobody is aware of the number of votes scored by each party from the said 388 polling units. The tribunal or Court of Appeal did not mention or ascribe any figure from the units to any party in their decisions.
“In fact, during the cross examination of the APC candidate, Senator Hope Uzodinma, he could not read any figure from the said results. He said that the figures were not clear. lt therefore beats the imagination where the Supreme Court conjured and manufactured the figures it used in declaring Uzodinma/ APC as duly elected?” the party stated.
“It drew the countries attention to the Supreme Court decision in Buhari v. INEC (2008); which says that “weight can hardly be attached to a document tendered in evidence by a witness who cannot or is not in a position to answer questions on the document. “One of such persons the law identifies is the one who did not make the document. Such a person is adjudged in the eyes of the law as ignorant of the content of the document.
“The question is; can the Supreme Court sit in Abuja on January 14, 2020, to increase the total number of accredited votes in election held in Imo State on March 9, 2019? “Is there any law, which permits the Supreme Court or anyone else for that matter, to unilaterally increase the total accredited votes by any margin after the accreditation and or the election? “Where did the Supreme Court get the numbers to declare Uzodinma/APC from a paltry 96,456 votes over Ihedioha/ PDP votes of 276,404? “Even if all the excess accredited votes of 127,209 manufactured by the Supreme Court were added to Uzodinma/APC it will be 223, 657 votes, still less than Ihedioha’s votes of 276,494 by 42,747 votes,” the party said. According to the PDP, the Supreme Court, as presently constituted under Justice Mohammed Tanko, has lost its credibility and no longer commands the respect and confidence of Nigerians, adding that if the people no longer repose confidence in the Supreme Court, the nation’s democracy, national cohesion and stability were at great risk. It called on the United States of America and the international community to take more than a passing glance to this issue in order to avoid an imminent breakdown of law and order.
“Our demand is that Justice Tanko Mohammed immediately steps down as CJN and chairman of the National Judicial Council as Nigerians have lost confidence in him and a Supreme Court under his leadership.
“Anything short than this is a direct invitation to anarchy chaos and a huge threat to our democracy and the corporate existence of our nation."

PDP's national chairman, Uche secondus also called for the resignation of President Buhari, while being led into the US embassy by PDP foreign liaison officer. He stated that President Muhammadu Buhari has lost control of security situation in the country.

“Our nation is in danger. We are in pain and we are in trouble. We back our minority leader asking and demanding that Buhari should resign because he has lost control absolutely.
“It is not time for propaganda and it is not time for the Presidency to respond to issues that are very sensitive and germane for the foundation of our country.
“When we speak, you see one of them responding but they have left the main issue. The issue is that our people are dying and are in hunger. You cannot travel from Abuja to Kaduna, you cannot go to Minna. You cannot go on road. All over the country, insecurity and killings are too much and overwhelming.
“We believe that the president has lost control. The international community should come quickly to the aid of Nigeria. We have the highest IDP in Africa today, and yet we are not at war. That is the mission why we are here.”