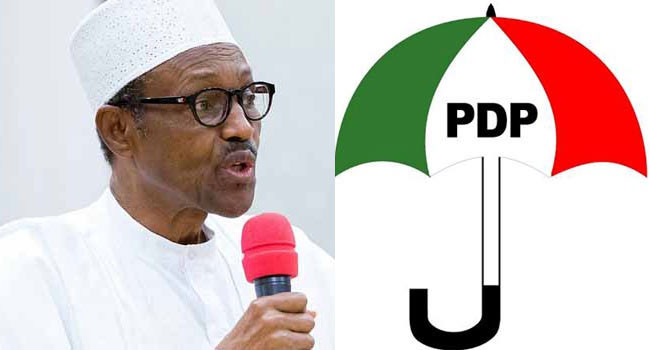 The Presidency has accused the People's Democratic Party (PDP) of hiring about 2,000 people to stage a protest against service chiefs on Monday, February 17.

In a statement issued by the Senior Special Assistant to the President on Media and Publicity Mallam Garba Shehu, the Presidency also insisted that the opposition party hired people to boo Buhari when he paid a condolence visit to Borno state over the killings of 30 persons.

The Presidency stated that it is part of a grand scheme to sell a lie about the administration to the undiscerning.

“The Presidency wishes to caution a section of the political class against misleading the public and inciting protests against the heads of military institutions.
“This has become necessary in view of received reports that about two thousand men and women have been hired to demonstrate against Nigeria’s service chiefs on Monday.
“This imminent gathering is the latest in a series of demonstrations orchestrated by the opposition to embarrass the government of President Muhammadu Buhari.
“As part of this overall scheme, the Peoples Democratic Party, PDP, with its belligerent politics, has been marching from one embassy to the other in protest against the Buhari administration and the nation’s highest court of justice, the Supreme Court. They are keen to give the impression that Nigerians are in support of them as they take to the streets, and they will go to any length to promote this false narrative.
“The recent incident in Maiduguri, Borno State, where an overwhelmingly cheering crowd gathered to welcome President Buhari, while a handful were recorded booing him, is a part this elaborate scheme. It is misleading, as some analysts have tried to do, to read this as verdict against President Buhari, who emerged winner with 94 per cent of the votes cast in the Presidential election in the state in February last year.
“This was clearly a hired few, but the news was promoted by the opposition who had of course positioned themselves to record the booing – all just to embarrass the President.
“We urge the media to remain unbiased and discerning in their reporting, instead of becoming unwitting tools in the hands of the opposition.
“A group of politicians and beneficiaries of the Boko Haram insurgency is right now paying for people to join their planned protest against our country’s service chiefs, and they will no doubt seek the media’s collaboration on this as usual.
“But there is news and there is promoted content – two very different things, one of which should never make the headlines as these recent fake protests have done."