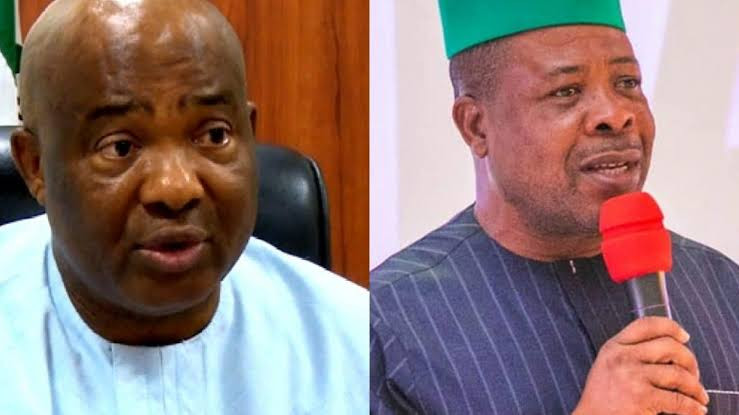 Hope Uzodinma has expressed hope of the Supreme Court not overturn the judgement which brought him in as Governor of Imo State and sacked Emeka Ihedioha of the People's Democratic Party from the position.

Speaking to newsmen after being presented to President Muhammadu Buhari by APC Chairman Adams Oshiomhole, Hope Uzodinma alleged that Ihedioha's reasons for seeking a review and reversal of the supreme court judgement are based on falsehood. He also insisted that the time for election petitions are over.

“I am not disturbed by the PDP’s move to seek a review of the judgment. I am not concerned because I believe they are going back to the Supreme Court based on falsehood because the number of accredited votes outside the excluded votes is what they are talking about.
“But, if you are going to court, you must go to court to discuss or talk about the number of accredited votes including the excluded polling units. If you compute the number of accredited votes inclusive of the excluded voters, the figures are correct.
“We went to court with an issue of exclusion; we didn’t go to court complaining about election malpractices, violence and all of that. So, it is a peculiar case.
“My case can be likened to that of Jim Nwobodo vs Onoh and Omoboriowo vs Ajasin – It is the position of the Supreme Court that where an election has been announced at a polling unit, INEC is bound to collect the result and enter the results into the Form EC 8B.
“So, let INEC tell us what happened; I’m a lawmaker and I participated in the amendment of the Electoral Act. Election petitions are timed.
“As far as I’m concerned, the 60 days left for Supreme Court to look into that matter has expired. I’m not a lawyer but with my little knowledge of law making, I understand what is in the Electoral Act."