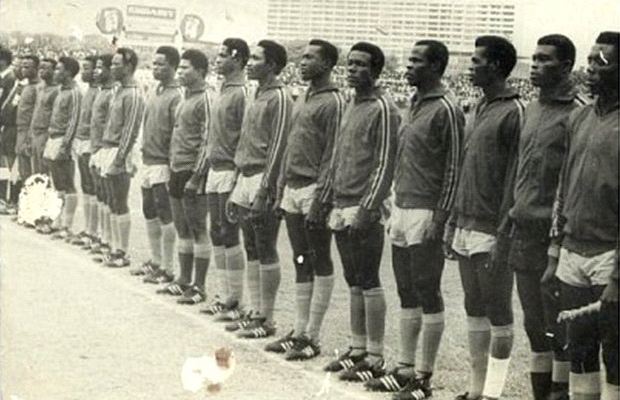 Virtually everybody born before the invention of the internet must have heard the tale of a nonexistent football match between Nigeria and India grin that obviously took place in a parallel universe and somehow we got to hear the gory stories of that match.
Though there are many variations of the story, every prevaricator seems to agree on a couple of facts about this fictional football match. Each storyteller agrees that;
1. This match ended with India scoring 99 goals and Nigeria scoring just one goal.
2. Nigerians where unable to kick the ball because the football kept turning to a lion (or something scary) to prevent them from playing the soccer ball.
3. The Indians later agreed that if Nigeria could score a goal, they would concede defeat
4. Samuel Okwaraji scored the winning goal and lost his life in the process.
5. FIFA banned India from soccer because they used black magic in that very game
With the help of common sense (not that it was absent back then), quick access to information and the internet, every right thinking Nigerian has come to realise that such a story should be filled under “Blatant Lies”.
Why Did This Story Thrive For So Long?
Most people like to pass off this story as true with the fact that no one has ever seen India in an International Football Match.
Since no one actually saw India participate in most international soccer games, this gave a little credence to the story.
Another reason this lie could thrive for long was the fact that credible information was not readily available at our finger tips.
It not like every Emeka, Audu and Ojo could visit Google in a matter of minutes and tell our ominous fabricators that they should stop spreading toxic lies.
And to be honest we have a tingling feeling that this lie was concocted by an elder of a community because, let’s be honest who questions the words of the elders in Nigeria. Remember, what an adult sees sitting down a child will never see even if he consults Google, Siri or Cortana.
The Element of Truth In This Story
On the 12th of August 1989, Nigeria lost Sam Okwaraji.
Sam Okwaraji was the player rumored to have lost his life in that game when in truth he died during a FIFA World Cup qualifying game against Angola in the 77th minute.
He collapsed and died of cognitive heart failure. May his soul rest in Perfect Peace. AMEN
So that is the only truthful thing about that story, the fact that a Nigerian player died during a football match. That’s it.
The match was not against India, we did not lose the match and as you must have guessed, and there were no lions either.
Tags
VIRAL PHOTOS