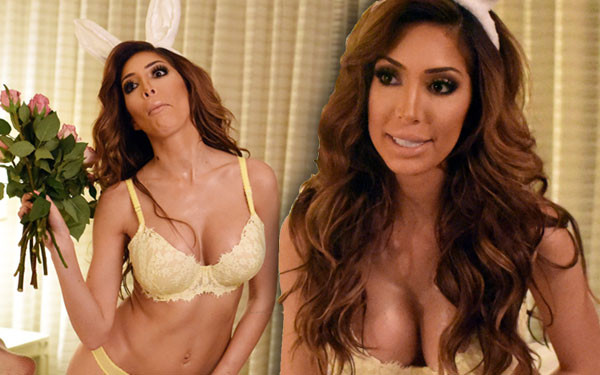 In a recent interview with Toofab, the former "Teen Mom" star, 28, spoke about her vaginal rejuvenation, where she admitted that her "vajayjay's looking better than ever" now.

"Oh, my God! We did it live on Instagram!" she said

During the procedure, Farrah said she was "laughing and numb. It was fine. And the recovery was like a week. My vagina doesn't miss anything that she cut, so I'm like, 'Hey, okay! It's like a divorce!'"

When asked if she's had sex after her vaginal rejuvenation, she laughed uncomfortably and said, "I don't date right now," adding, "I don't know if my vagina's ready to date, really. I mean, it's like tight, it's tight. I'm scared. I'm scared to use it! Don't break it!"

"I definitely think it's like a reborn virgin situation," she said with a laugh.
Asked about a recent study claiming young men are afraid of sex because they don't feel they can live up to expectations, Farrah wondered, "Are they terrified of sex because they're seeing so much sex?"
She added: "I would do some daily affirmations. If I was a man and I was feeling insecure, 'I'm great at sex! I'm gonna attack that sex!' I'm saying, if you're in a relationship, you better [say] daily affirmations and positive stuff -- like those good Christian men do, what those good pastor husbands do."