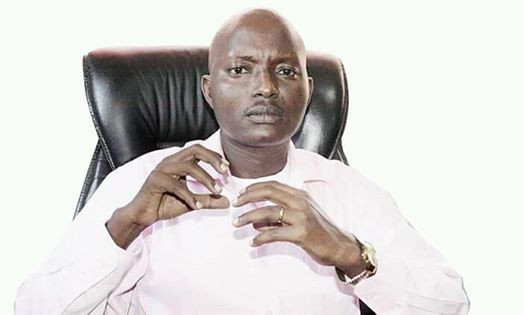 Religious leaders in Uganda have condemned Pastor Aloysius Bugingo of the Makerere based House of Prayer Ministries International, who recently dismissed Christian marriage vows as unbiblical and satanic.

The controversial pastor recently kicked up a storm when he said the marriage vow ‘Till death do us part’ made in church is not anywhere in the Holy Bible.

Pastor Bugingo, once again stirring controversy, told thousands in his Sunday congregation last week, that the Bible does not back the “till death do us part” vow for newlyweds.
“I’ve read the bible countless times,” he said. “But I know of no verse in there, in which God says ‘only death will part the married. I also haven’t seen a couple in the bible, saying ‘till death do us part.”

Bugingo termed this vow as not only unbiblical, but also “satanic.”
“Satan has trapped us with this thing, because he came to steal, to kill and destroy. In the end, you find that when a couple realises it is no longer compatible, one will find a way of killing the other,” he said.

In an official response, the Church of Uganda quickly linked Pastor Bugingo’s comments to his own troubled marriage life.

Rt. Rev. Johnson Twinomujuni, the Bishop of West Ankole Diocese said Bugingo was desperate in trying to look for an excuse for his own controversial separation from his official wife Teddy Bugingo.
“Of course, for this particular statement and others of similar nature he has been making, one underlying and obvious factor, which is having a significant influence on his judgement, is his divorce, the possibility of other forms of conditioning notwithstanding,” said Rev Twinomujuni.
“His yearning soul is in a desperate need for justification over his prejudiced separation with his bona fide wife, which, because he cannot get it by virtue of moral objectivity, he is deliberately misinterpreting the Bible, so he can justify his act – if it were possible.”

The Anglican cleric in the lengthy statement, went on to provide a string of bible scriptures that directly contradict the pastor’s interpretation.
“Does the Bible he has read countless times have the following verses: Rom. 7:2-3; Mal. 2:13-16; Heb. 13:4; Mat. 5:32; 19:4-9; plus 1 Cor. 7:2-40, and especially verse 10 which says, “To the married I give this charge (not I, but the Lord), the wife should not separate from her husband.” Verse 11b also states clearly, “and let not the husband put away his wife,” he wondered.
Others, he said, include Cor. 7:39 which says, “A wife is bound to her husband as long as he lives. But if her husband dies, she is free to get married to whom she wishes, but only in the Lord”
“Consider Jesus’ command: “What God has joined together let no man put asunder” (Mat. 19:6). Has Bugingo read it? Can he define either the logical or conceptual scope of its duration? In other words, where and when does the legality of that instruction’s demand end?” he wondered.
Does the Bible Mr. Bugingo has read have God’s assertion “I hate divorce” in Mal. 2:16? When God says so, what does that mean for the married? Doesn’t that imply that God requires that our marriage be a lasting one? Where does a marriage whose parties won’t divorce end, if not till death separates them?
On Bujjingo’s claim that the words “till death do us part” are not in the holy book, Rev Twinomujuni explains that some bible instructions are not explicitly stated.
“Is this to indicate that for him every activity, phenomenon, invention, and venture ought to be stated in the Bible for it to be true, right, or acceptable? Should the Bible have stated in black and white: build cars, use computers, boil water before drinking it, form a political party, construct aeroplanes, make tarmac roads, establish hospitals, design smart phones, make jets, use treadmill and TRX bands for fitness, establish constitutions, set up universities, etc…so we know that doing such is biblical, and therefore acceptable?”

This isn’t the first time pastor Bugingo has questioned fellow Christian institutions.In 2017, he caused a steer when he gathered scores of Bibles, whose versions he claimed had been adulterated, and set them on fire.
Tags
NEWS