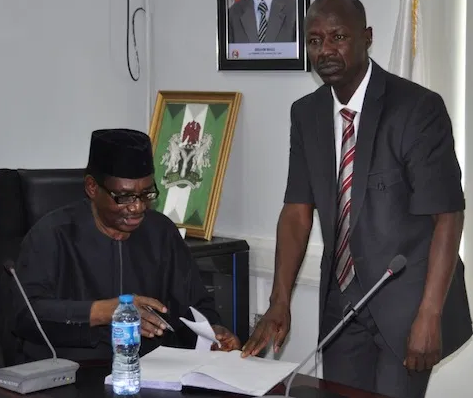 The arrest of former Attorney-General of the Federation and Minister of Justice, Mohammed Adoke has been confirmed by Chairman of the Presidential Advisory Committee against Corruption, Prof. Itse Sagay.

Sagay confirmed the arrest during a courtesy visit to the headquarters of the Economic and Financial Crimes Commission (EFCC) on Wednesday, November 20th saying the arrest is the latest success in the fight against corruption under the federal government.

Adoke is facing criminal charges bordering on alleged abuse of office and money laundering with respect to the granting of the Oil Prospecting License (OPL) 245 to Shell and ENI, brought against him and four others by the Economic and Financial Crimes Commission. His arrest follows a warrant issued by a Federal Capital Territory High Court in Abuja requested by the EFCC.

He added that the fight against corruption is gaining momentum under the Buhari-led Federal Government due to the fightback from its beneficiaries.

“The former attorney General Adoke has been arrested in Dubai. It’s a continuous thing, so when Nigerians pretend and say what is the difference this government has brought into the fight against corruption, what has been achieved? There is no difference, it amazes me. For me, it’s a sign of patent bad faith being expressed by the elite who were the beneficiaries of corruption.
“They are undergoing the pains of having to earn their living, rather than simply collecting easy money where people were building edifices without any sign of employment of any sort. There has been a lot of change and the EFCC activities are responsible for most of this change.”

The EFCC had obtained a warrant of arrest on April 17 against Adoke, as well as a former Minister of Petroleum Resources, Dan Etete, and four others over the OPL 245 scandal. It filed criminal charges against the defendants but decried it had been difficult for it to serve them the charges or produce them in court as a result of their absence from the country. The court asked the EFCC in October, to serve the criminal charges to Mr. Adoke by substituted means, after lifting the initial warrant against the defendant due to their unavailability.
Tags
NEWS