Father accuses Chuck E.Cheese of racism after an employee dressed as a mouse character ignored his daughter while hugging White kids 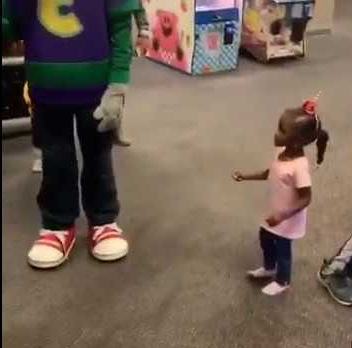 A father has accused Family entertainment center company, Chuck E. Cheese of racism after an employee of the company who was dressed as the iconic mouse ignored his daughter but hugged and waved at other kids who are Caucasian.

Damon Payne took his 3-year-old daughter Dynver to Chuck E. Cheese at Metairie on Monday, November 25, to celebrate her birthday.

While there, the father recorded a video of his daughter meeting the mouse character, only to be ignored. In the video, the girl is seen repeatedly reaching up to hug the character, but he ignores the girl and focuses on hugging other children.

Payne can be heard in the video asking the character "You don’t see her?" and adding, "She’s right here."

Yet, the character continued to ignore little Dynver, who was the only child of color in the video. Payne pointed out that the children receiving attention from the character are white.

Payne posted the video to Facebook with the caption "MY KIDS WILL NEVER STEP FOOT BACK IN Chuck E Cheeses. #racismdoesntcarewhatage. Please do me a favor share this and tag anybody with power she didn’t deserve that. That’s at the one in Metairie."

Payne said he brought the employee's actions up to the manager and showed the manager the video. He said the manager offered the family 50 free tickets to redeem at the store’s shop, which he said only insulted them further.

On Tuesday, Payne said a different manager contacted him and said the company’s policy is for the character not to initiate contact with a child.

A representative from Chuck E. Cheese issued the following statement:

"Our cast members are trained not to initiate physical contact with the children- in case they are afraid of Chuck E. We want to assure our guests that we take great measures to protect the experience all children and families have in our restaurants."

However, this excuse has not been accepted by social media users who say the character obviously had no problem initiating contact with other kids.