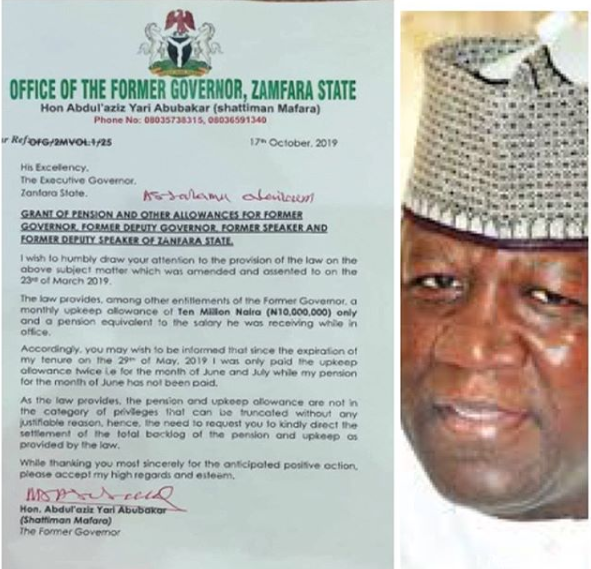 Former governor Abdulaziz Yari Abubakar has written to the Zamfara State government, demanding the payment of his upkeep allowance, which according to him, has not been paid for some months.
He is demanding payment for the months of August, September, October and possibly November.
In the letter dated October 17, 2019, Yari said since the expiration of his tenure on May 29, 2019, he has only been paid the upkeep allowance twice, which was for the months of June and July, while his pension for the month of June has not been paid.
According to the letter, the monthly upkeep allowance for an ex governor, in the state is N10 million and it is backed by law, which was amended and assented on March 23, 2019. He reminded the state government that the pension and upkeep allowance are not in the category of privileges that can be truncated without any justifiable reason.
The Chairman, Publicity Committee of the All Progressives Congress in the state, Alhaji Ibrahim Muhammad Birnin Magaji, confirmed the letter to Daily Trust, alleging that it was leaked by the state government. “They leaked the letter because of the press conference we held last Saturday. After all, the ex-governor was asking for his entitlements not any favour,” Birnin Magaji said.
Tags
NEWS