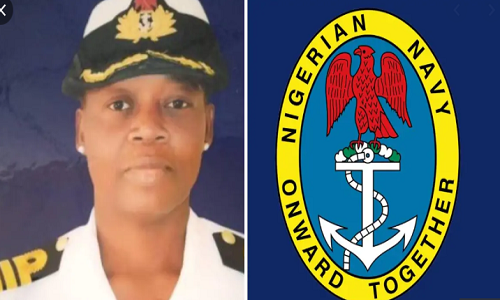 One Simon Bernard, a teacher at the Command Secondary School of the Armed Forces Command and Staff College (AFCSC) in Jaji community of Kaduna state, has confessed to killing Navy Commandant Oluwayemisi Ogundana.

Vanguard reports that Bernard who was arrested after the person he gave Ogundana's car to sell was apprehended, told the police that he and the deceased were having an affair before she died. According to Vanguard, Simon told the the police that trouble started between them when she used her power as the Commandant of the school to get him sacked as the Chairman of the School's Parent Teachers Association PTA. The suspect also said he bore a grude against Ogundana who also refused to pay him the sum of N2.5 million after he was sacked.

Simon was arrested after a civilian driver was caught with the deceased's Toyota Highlander. He was said to have packed a Toyota Highlander belonging to the Commander Ogundana at Air Provost Squadron Office in Kaduna owing to fuel shortage in the car and went out of the base to buy fuel. Before coming back to put the fuel into the car and move it out, some Airforce officers who had gotten wind that the car belonged to a missing Navy Commander from Jaji, laid ambush around the SUV and arrested him immediately he returned.

He was taken into custody. During interrogation, the driver confessed that Mr Simon gave him the SUV to sell.

Ogundana who is said to be married with her husband and children residing in Lagos state, was declared missing on September 20th. Her dismembered body was later found inside a Ghana-Must-Go bag dumped inside a shallow well near Deeper Life Bible Church in Jaji Cantonment.