Relationship counsellor, Amara Nwosu and ex-husband Francis Van-Lare call out each other after he proposed a vacation with a married woman 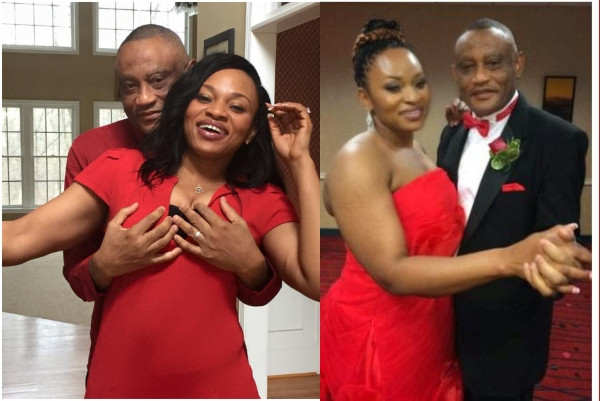 Amara Nwosu and her ex-husband Francis Van-Lare engaged in a call-out session on Facebook following his post which ignited controversy on the social media platform.

Francis had proposed a vacation to Venice, Italy with a married woman in which he gets to compensate the husband of the lady with N700k after the trip. He said the trip is about changing mindsets and a liberal husband is needed for it.

He wrote "A married woman is suggesting a challenge for those married women bored at home and will gladly travel with me without their husbands . I was like the world view is changing , why not ? I am perfect gentleman.
"I will put up a challenge in January as a summer present if you are married and have a liberal husband . Changing mindsets !The Winner will get a trip to Venice Italy to ride the gondola with me . You have three months to convince hubby that you want to participate. You gotta participate in January to win . Shake the table
"My question to married men is .. will you consent to your wife going on a vacation without you with a single man ?"

"For those of you having high blood pressure about my upcoming indecent proposal challenge , please watch this 1993 movie . My own proposal will include N700,000 shopping money for the husband who consents and his wife wins the trip to Italy . Money will be paid after the wife returns .Your marriage must be less than 10 years . Meanwhile go and watch this movie . Changing mindsets . See you in January" 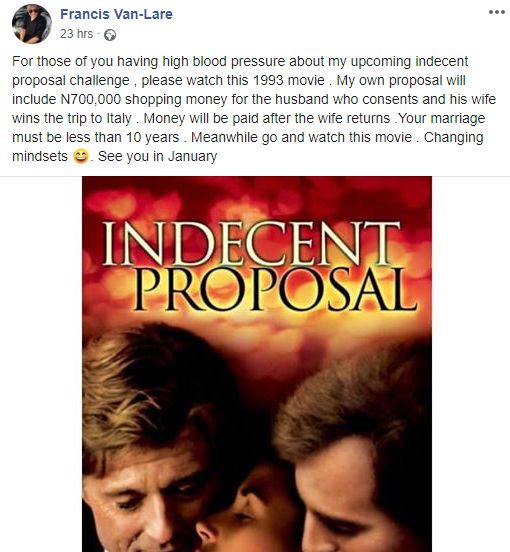 However following the controversy that trailed the proposal, Amara recounted being told by some people that God has vindicated her after her marriage crashed in 2017. According to the relationship counsellor, she has shut the world away from her ears as she is not bothered with what anyone has to say.

"Someone said to me, “Amara, when you took that step in 2017, everyone called you stupid and all sorts, but today, the world can see that it was a very good step”.
Another said to me this morning, “God has vindicated you”.
People, just do what’s right for you and your immediate family. As long as God is with you, the world will see His glory in you.
Do not live in perpetual pain just because you have to please the world. It took me one whole year to prepare my mind to take that step of deliverance. When you make a mistake, do everything you can to correct that mistake without thinking of what the world has to say. At first, I was bothered by what the world has to say. But gradually, I shut the world away from my ears and my heart and cared less.
Do you and all will be well, as long as you stand with God. As long as you walk in total obedience to God, He will glorify Himself in you.What should matter is you finding peace with yourself and with God.What am I saying? Shut your ears, shut your heart, shut your mouth and do you!
One kwuru njo ekwubegokwa nma." she wrote. 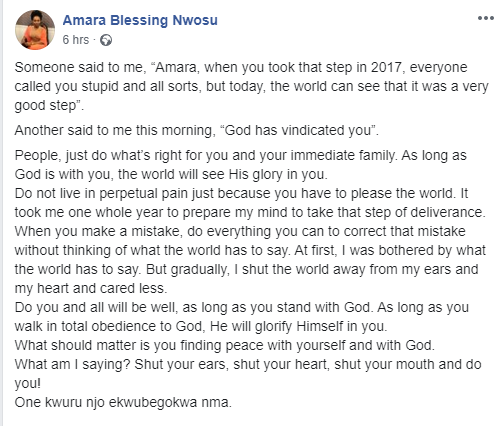 Francis who fired back at his ex-wife over the Facebook post, said she shared it because she is still in love with him or not happy with the Pastor she married. He warned her to leave him off her wall while also revealing that he is respecting a court agreement of not discussing each other on social media.

"I was sent a hilarious post made by Amara Nwosu .That woman must still be in love with me or not happy with her pastor husband who cannot take her to Venice Italy . She can participate in the indecent proposal challenge .
If anyone knows her please tell her to leave me off her wall because she will not like it once I focus on her . I am respecting court agreement not to discuss each other on social media , something she asked me for and I agreed but she is been talking about me or subbing me on her wall . If you know her please tell her to leave Francis Van-Lare alone hence I come back on my wall and finish the job of 2017 ." 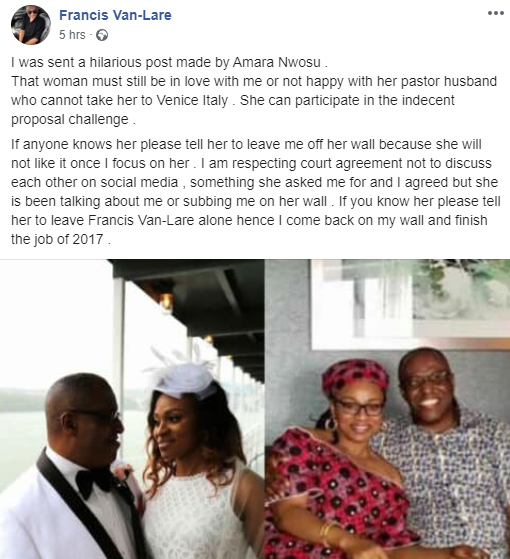