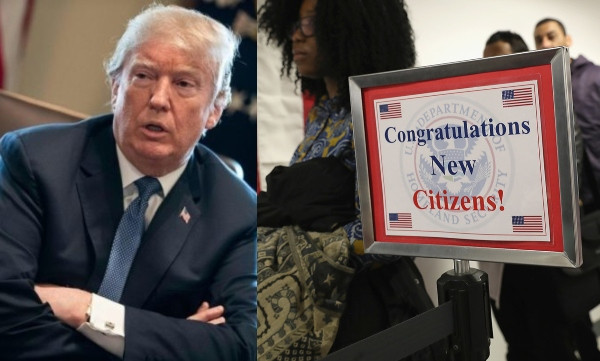 A new policy alert released by the US Citizenship and Immigration Services under President Trump's administration, has cancelled automatic citizenship for the children of some US service members and US government employees living abroad and children of non-citizens born in the United States.

Under the new citizenship policy which will be effective from October 29 as announced on Wednesday August 28, US citizens who gave birth to their children abroad are expected to apply for U.S. citizenship ahead of the child's 18th birthday.

Non-citizens are also expected to stay for at least 6 weeks in the US before their children born in the country will be considered citizens.

“Effective October 29, 2019, children residing abroad with their U.S. citizen parents who are U.S. government employees or members of the U.S. armed forces stationed abroad are not considered to be residing in the United States for acquisition of citizenship,” the policy read.
“Similarly, leave taken in the United States while stationed abroad is not considered residing in the United States even if the person is staying in property he or she owns.
“Therefore, U.S. citizen parents who are residing outside the United States with children who are not U.S. citizens should apply for U.S. citizenship on behalf of their children under INA 322 8, and must complete the process before the child’s 18th birthday.
“The child of a member of the U.S. armed forces accompanying his or her parent abroad on official orders may be eligible to complete all aspects of the naturalization proceedings abroad. This includes interviews, filings, oaths, ceremonies, or other proceedings relating to naturalization.
“Applications filed on or after October 29, 2019 are subject to this policy. The policy in place before October 29, 2019 applies to applications filed before that date. Children who have already been recognized through the issuance of a Certificate of Citizenship as having acquired U.S. citizenship under INA 320 are not affected by this policy change.”