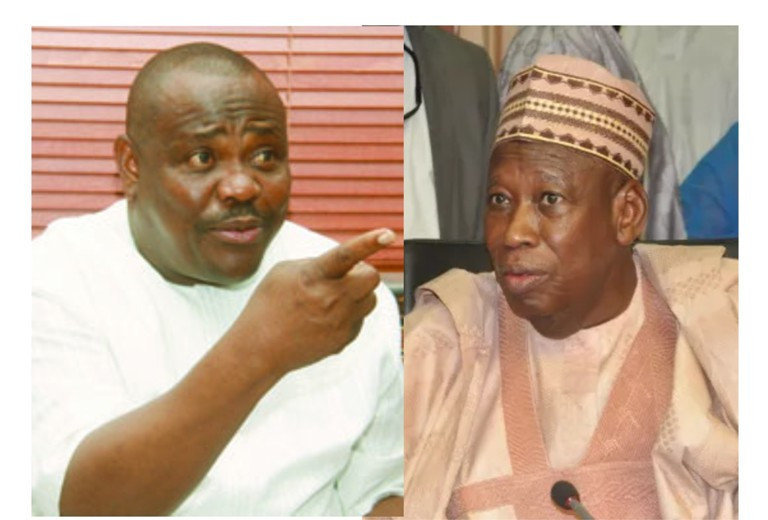 Governor Nyesom Wike of Rivers state has blasted his Kano state counterpart, Abdullahi Ganduje, for threatening to take him to court over the reported demolition of Rainbow Town Central Mosque in Trans-Amadi area of Port Harcourt, Rivers State capital.

Wike received serious backlash during the week over reported claims he demolished a mosque. He has since denied the claim.

Ganduje in a statement released today, vowed to drag Governor Wike to court over the alleged demolition of the mosque. Read here.

Reacting to Ganduje's threat, Governor Wike in a statement released by his media aide, Simeon Nwakaudu, said the Kano state governor should be reminded that he, Wike, is not a dollar bill Ganduje can pocket'' sheepishly and recklessly''.

Ganduje was involved in a bribery scandal last year after footage of him purportedly receiving wads of dollar bills from contractors in his state surfaced online.

It beats my imagination that Kano State Governor, Abdulahi Umar Ganduje is still in the habit of making irresponsible comments about Rivers State. Up till now, Ganduje is yet to realise that Governor Wike is not dollars that he can pocket recklessly and sheepishly.
I saw a statement released by Abdulahi Umar Ganduje. He said that he will sue Governor Wike over the falsehood that a Mosque was demolished in Port Harcourt. For the umpteenth time, no Mosque was demolished by Governor Wike. No Mosque was demolished by the Rivers State Government.
The story was a fabrication by one Alhaji Tobacco. The fabrication was orchestrated by Daily Trust and The Nation Newspapers for obvious mischievous political reasons. These baseless press releases confirm the ugly plot.
Several journalists and civil society groups have visited the disputed land and no traces of any Mosque were found at the location. Governor Wike personally led journalists to the disputed land and the world saw that no Mosque existed there.
On Saturday, the Rivers State Islamic Leader/Vice President General, Rivers State Council for Islamic Affairs, Alhaji Nasir Uhor stated that there was no physical structure of a Mosque at the disputed land at Rainbow Town in Port Harcourt. He said the insinuation that any structure was at that location was not true. He also admitted that a Rivers State High Court confirmed that the disputed land belongs to the Rivers State Government.
Suit Number PHC/986/2012 between Registered Trustees of Trans-Amadi Mosque, Port Harcourt (Claimant) and the Commissioner, Ministry of Urban Development and Physical Planning, Rivers State, the Governor of Rivers State and the Attorney General of Rivers State (Defendants) was resolved by Justice G.O. Omereji on Tuesday, 27th November, 2018. This matter pre-dated Governor Wike.
Justice Omereji of the Rivers State High Court held that: "The defendants have in Exhibits J, J1 and J2 inclusive of Exhibit K, which is the Certificate of Title, established that the land, the subject matter of this suit, was acquired in 1959 by the Government.
"My humble opinion is that the claimants have not established that they have better title to the land, the subject matter of this suit and they have not established that at the material time they were in possession and that the defendants do not have better title to the land".
The Court further ruled that the claimants had no approval to build on the disputed land.
The entire world is aware of the above facts. Nobody has circulated any photographs or videos of the said Mosque that Ganduje and other APC Chieftains are harping on. They merely want to use a non-existent Mosque story to score ugly political points.
Pray, what redress would Ganduje be seeking in court when he sues Governor Wike? Would Ganduje tell the court to relegate the Rivers State Ministry of Urban Development and Physical Planning and enthrone its Kano State Counterpart? Would Ganduje be asking the Court to hand over jurisdiction to Kano State High Court?
Under the Land Use Act, the governor is responsible for allocation of land in all urban areas to individuals' resident in the state or to organizations for residential, agricultural, commercial and other purposes . Perhaps, Ganduje would be telling the Court to deny the Rivers State Governor of such powers, while he retains same powers under the Land Use Act in Kano State.
The Press Statement attributed to Ganduje is a confirmation that this country is at its lowest point. This is the worst form of administrative ignorance.
As a Governor with a bruised ego, Ganduje thinks that this religious falsehood would afford him a backdoor entry into the national good book. Sadly, he has exposed himself as a terribly ignorant leader who basks in baseless claims.
The disputed land is already before the court, as the Registered Trustees of Trans-Amadi Mosque, Port Harcourt (Claimant) sued the Rivers State Government in 2012. Having lost at the Court of First instance, these trustees have appealed the judgment.
GANDOLLARS MAY HAVE FORGOTTEN
On December 8, 2016 , Abdulahi Umar Ganduje, as Chairman of the Rivers State APC Election Rerun Campaign Committee, threatened violence on Rivers people at the Yakubu Gowon Stadium. Alongside several APC Governors, Ganduje Ganduje called on APC Thugs to unleash mayhem on Rivers electorate for the purpose of rigging the rerun elections. He claimed that the aim was to ensure that the APC took control of the House of Assembly for the purpose of impeaching Governor Wike.
The APC Federal Government deployed 57,000 security personnel, billions of naira, millions of dollars, Jet Fighters and Gunboats for the rerun elections. Rivers people stood with Governor Wike and the APC was roundly defeated. Rivers people rejected the plot to pocket Governor Wike by the APC rigging machine.
GOVERNOR WIKE IS NOT DOLLARS
Abdulahi Umar Ganduje, a man who enjoys bribery and falsehood, must realise that Governor Governor Nyesom Ezenwo Wike is not dollars that he pockets with ridiculous abandon. Governor Wike is a lover of the rule of law, due process, religious tolerance and peaceful co-existence. He cannot be intimidated by the illiterate threat of lawsuit from a man of low moral standing.
Gandollars, sorry, Ganduje is still talking because he thinks that Nigerians have forgotten about his crime against his people.
Picture: Dec 8, 2016 , Abdulahi Umar Ganduje, as Chairman of the Rivers State APC Election Rerun Campaign Committee