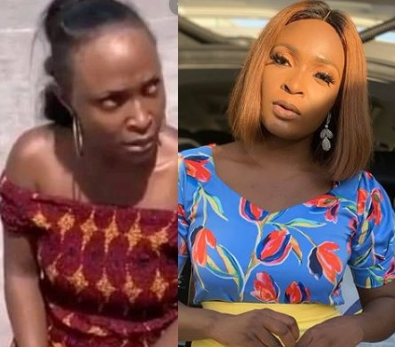 Blessing Okoro, the social media influencer who made news a couple of months ago after using a China-based Nigerian businessman's house to pose on IG, claiming it was hers, has reacted to the new song by music star, Paul Okoye aka RudeBoy, titled Audio Money, which prominently featured her busted ''fake-it-till-you-make-it'' scandal.

Blessing in a post shared on her IG, said she is glad she inspired the song that preaches against living a fake life.

Read what she wrote below

Glad I inspired the song.The song is titled Audio , meaning fake .The song is about people who live fake life to oppress others and make you feel like you are not doing well for yourself.This young girl as you can see in the video went to snap pictures in someone’s house and claimed it was her own and got embarrassed and humiliated.The lessonsDo not run faster than your shadowTake life easyOne step at a time . Success is success anytime you attain it you will be celebrated.You are doing ok for yourselfInstagram is just a social entertainment..My name is Okoro BlessingAm glad to be an inspiration to the world .Las las we go still build the mansion ?.Just reason with me, say if I no get today I go get an tomorrow