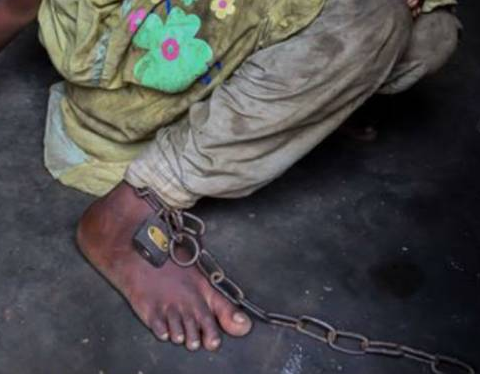 Malam Muhammadu Ujudud, who chained his daughter and son for two years over alleged disobedience, has died in the custody of the National Agency for the Prohibition of Trafficking in Person (NAPTIP), Kano State command.

Confirming the death, the Commandant of Agency, Alhaji Shehu Umar, said the man died on Friday, September 27th at Murtala Muhammad Specialist Hospital Kano.
He said, “the man was brought to the command around 6 pm and while at the command he sought our permission to ease himself and before you know it, he slumped and we rushed him to the hospital where he later passed on while receiving treatment.

“His wife has confirmed to us that prior to his arrest, the man was suffering from heart problem and blood pressure,” he said The NAPTIP commandant however assured that the agency would continue with its investigation into the circumstances that led to the chaining of the deceased’s children.
“We will go back to the village and find out from the man’s neighbours about his behaviors and why he chained his children. His death will not stop us from furthering our investigation,” he assured.

Malam Ujudud was arrested in Rinji village of Madobi Local Government Area of Kano State by the NAPTIP’s official for allegedly chaining his two children for two years over alleged disobedience. While the female was chained for allegedly rejecting forced marriage, her sibling was said to have been chained for allegedly becoming a drug addict.
Tags
NEWS