What God told me about Osinbajo’s helicopter crash — Pastor Adeboye 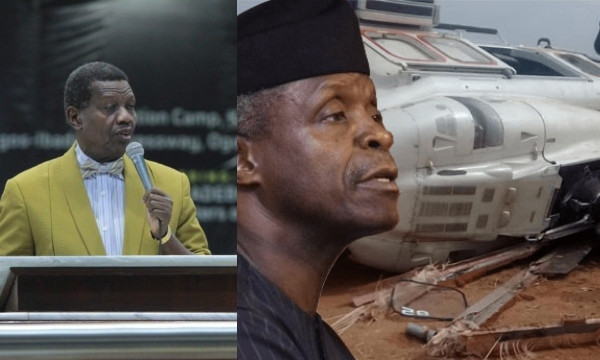 Pastor Enoch Adeboye while preaching at the Holy Ghost Service of the Redeemed Christian Church of God 67th Annual Convention on Friday August 9, recalled how God told him about the danger Vice President Yemi Osinbajo was in before the helicopter crash he survived in February with his team in Kabba area of Kogi State.

According to the RCCG General Overseer, God whispered to him while in his prayer room that his son (Yemi Osinbajo) was in danger.

“I got the message but I didn’t know how to present it,” he said. “He was going around on political campaigns so I didn’t know how to stop him. I also didn’t want him to be scared so I resorted to praying for him.”
The General Overseer said he prayed for two minutes, repeating “Father, protect your son,” four times.

Recall that Vice President Yemi Osinbajo in his testimony after the February crash he escaped unhurt, said he did not understand why the pastor repeated the prayer of safety for him.

“I briefed him on the progress we have made with the campaign and then the General Overseer prayed for God’s protection for me in all my travels and movements.
“That was not what the devil had planned but what did the headline read, Vice President Osinbajo’s helicopter crashes all unhurt, not one crash,” Osinbajo said during a thanksgiving service in Lokoja.