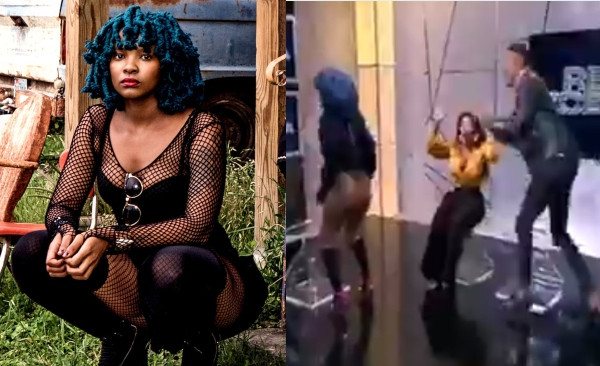 Moonchild Sanelly, one of the African artistes that featured in Beyonce's Lion King album gave her fans more than they bargained for on a live TV show.

The South African singer left many stunned after she appeared on SABC 1’s Real Goboza, twerked for the show’s presenters, lifted her skirt on TV and flashed her naked a*s at the camera.

Commenting on the nude act that attracted criticism, the singer said she was just being herself and won’t change for those who have a problem with her. Sanelly also advised women to embrace their curves and stretch marks instead of hiding it or ridiculing other women over their bodies.

“I don’t feel anything that people say. I do what I like and I blocked out the hate. If you choose to focus on my personality, when I choose to be myself, it’s on you.”
“This is not a strategy this is who I am. I don’t like dressing. I like my bum, I love my body and I celebrate it. People must get over themselves. I’m into myself.
“I have an amazing bum but I work for it. If no one is talking about you, when you are being yourself, then you have a problem. If you make people talk about you because it’s a strategy, then you have to maintain the non-personality because of strategy.”