'I was trained to be combative' - Adams Oshiomhole tell critics 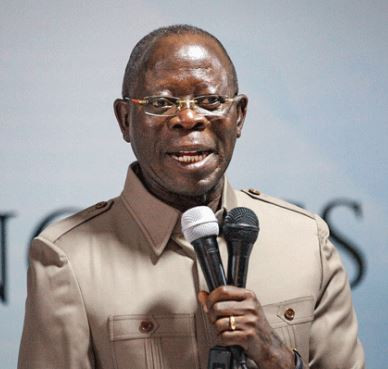 National Chairman of the All Progressives Congress (APC), Comrade Adams Oshiomhole has told those accusing him of being too combative as the National Chairman of a governing party to keep their cool as he was not about to change his approach because he did not join politics to be changed by the way things are done by politicians.

Oshiomhole said his long stay in Labour taught him to be combative, stressing that he did not join politics to be changed or commit class suicide, but to impose his own ways of doing things.

He also said he was of the view that diplomacy will not address the challenges facing the country, adding that only an aggressive engagement can force those benefiting from the statusquo to change in such a way that will make the country better.

Oshiomhole said: “whatever I am doing today, my style and choice of what I do and what I abstain from doing, I owe to Labour. If you study the Nigerian media, there is this saying that as national chairman of a governing party, I am not supposed to be combative. I am even more convinced now about the need for combat.
“If this country is going to change and deliver to the poor, deliver decent jobs, we need not diplomacy, but aggressive engagement to force those who are benefiting from the status quo to change and in such a way that will make the country to work for the people who live on their wages.
“Some people said to me that I am too combative and I said to them that I was not coming to copy their method, but coming to impose my method to change the system and not for the system to change me. I refuse to be changed by the system. My hope is that with more comrades coming into politics, we will work together to change the system for a better future.
“I am very proud of my background, as a factory hand, as a factory organiser, as a General Secretary of Textile Workers and as President of NLC. Some people said I have I cross over and I ask, to where? I just continue with the struggle. I move from conveying my grievances with placards and organising strikes with protest and pressure, to trying my hands on the drivers wheel, to try to do those things that I try to communicate with placards and then use executive pen to get them done.”
Tags
NEWS