Graphic: ''It's the devil's work'' - Mother says after pouring boiling water on daughter in Lagos 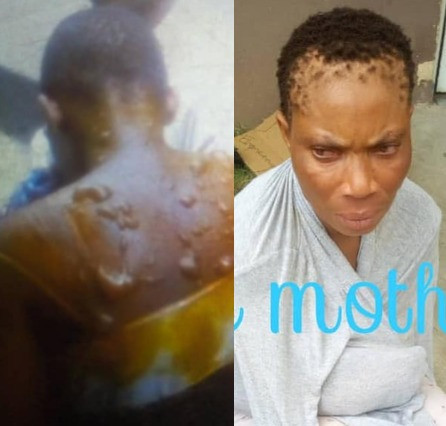 A woman residing in Lagos state, has blamed the devil for using her after she poured boiling water on her 13-year-old daughter's body in the Ilupeju area of the state on Tuesday July 30th.

Identified as Mrs David, the woman accused her daughter, David Glory, of stealing N500. While interrogating her, the girl denied the allegation and was attempting to walk out on Mrs David when she lifted the boiling water from the cooker and poured on her daughter's body.

Glory sustained serious burns on her back and buttocks. She was rushed to the Gbagada General Hospital where she is currently being treated.

Activisit Harrison Gwamnishu in a chat with LIB, said Mrs David is currently being detained at the Ilupeju Police station and will be charged to court this morning August 2nd, for grievious harm on her daughter.
Harrison told LIB that when the mother was inetrrogated, Mrs David blamed the devil for using her to harm her daughter.