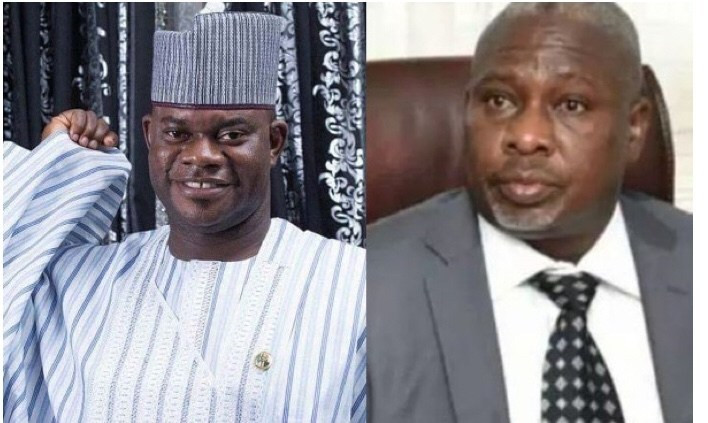 Governor Yahaya Bello of Kogi state has denied claims made by his deputy, Simon Achuba, that he is after his life.

Achuba at a press conference in Kogi state yesterday August 1st, alleged that Governor Yahaya, who he has been having a running battle with, has detailed some assassins to eliminate him.

Governor Yahaya has however dismissed the allegation. In a statement signed by his chief Press Secretary, Onogwu Mohammed, the governor said the allegation is ''bogus and an exhibition of a blind rage by an angry suckling man with a long-term pattern of abnormal behaviour characterized by exaggerated feelings of self-importance”.

He demanded his 'aggrieved' deputy to provide evidence to back up the assassination claim. The statement in part reads

“We do not train assassins, and as such, the state government or her personnel cannot be involved in sending assassins to murder any human soul let alone a deputy governor of our dear state. Despite these unsubstantiated ramblings, however, we deem it fit to clear the air by letting the general public know that the Kogi State government would not be dragged into any form of political gerrymandering concocted for the furtherance of any person’s political interest or notoriety.
We warn Mr. Simon Achuba who is known to history as a man whose affinity for violence is unparalleled, not to judge us by his own standards.

“The report of the Kogi State Government Commission of Enquiry on the Iyaño ethnic crises in 2017 is still fresh in our memories.
“The Kogi State government led by Alhaji Yahaya Bello, therefore, rejects the futile attempt at seeking to link it to any assassination attempt on the deputy governor, and we advise that people desist from seeking political capital from scenarios they imagine would advance their parochial cause, no matter how banal such causes may seem.”
Nigerians and Kogites in particular are aware that it is not in the character of the administration to persecute perceived opponents, let alone the second in command of the ‘New Direction’ team.
“We have remained a model for peaceful engagement and political dialogue. Any inclination at portraying us otherwise will not be acceptable.”