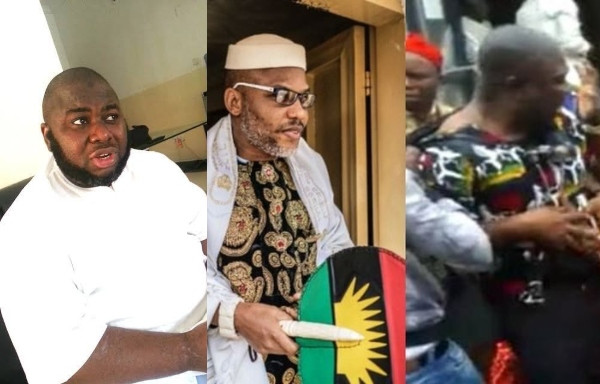 Asari Dokubo slammed Nnamdi Kanu over the attack on Senator Ike Ekweremadu on some members of the Indigenous People of Biafra (IPOB) at an event hosted by the Igbo community in Germany.

Recall LIB reported that Nnamdi Kanu described the attack as a courageous act and also accused the Enugu West Senator of conniving with Governors from the South-East region to proscribe the group.

However lashing out at Nnamdi Kanu over the attack, Asari Dokubo recounted how Senator Ike Ekweremadu worked for the release of the IPOB leader from prison. He further described the fugitive separatist leader as an “ingrate and Frankenstein Monster”.

“Fellow Biafrans, I saw this coming that a fellow Frankenstein Monster was being created. I saw the signal, saw the red flag and I warned that if something is not done about Nnamdi Kanu, he would consume the Igbo people." he said in a video shared on Facebook.
“I took time after the latest attack on one of our finest and best lawmaker, Ike Ekweremadu, who I know very well was one of those who made this ingrate called Nnamdi Kanu to come out of prison. I’m privy to most of the discussion and I feel very sad that I was part of those meetings.
“Ekweremadu and Abaribe were the arrow heads that moved for the release of this ingrate called Nnamdi Kanu.
“That Ekweremadu will be attacked, disgraced and his clothes torn for what purpose and to achieve what is unexplainable.
“If this dangerous trend is stopped among Igbo Biafrans, where one man abrogate to himself the right to give life and pronounce death, then he will be in fire because others will fight him.
“Fulani herdsmen are killing people and I have not heard cowardly IPOB raising their hands to defend the South East, it’s only to sneak in the night and kill fellow Igbo Biafrans.
“Shame on all those supporting it, what contribution did Nnamdi Kanu’s father or mother gave to the Biafra liberation struggle, who is Nnamdi and his father. If he don’t rise up against this evil and send this miscreant out of our house, this is the time to send them out"