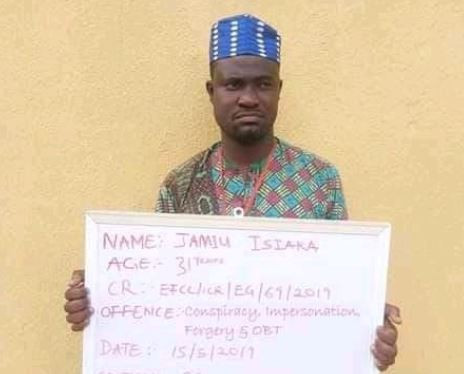 Justice Mahmood Abdulgafar of a Kwara State High Court sitting in Ilorin on Monday, July 1, 2019 turned down a bail application filed by a self acclaimed herbalist, Jamiu Isiaka who is standing trial over alleged thirty million naira fraud.

The Economic and Financial Crimes Commission had on June 11, 2019, arraigned Isiaka on a four count charge of fraud, conspiracy and impersonating some senior government officials including the Group Managing Director of the Nigerian National Petroleum Corporation, Dr Maikanti Baru, Senior Special Adviser on Media and Publicity to the President, Mr Femi Adeshina, a national commissioner of the Independent National Electoral Commission, INEC, Amina Zakari among others.

He pleaded not guilty to all the four count charges. Ruling on the bail application on Monday, Justice Abdulgafar said the accused person have failed to show sufficient evidence of why the court should use its discretion in admitting him on bail.

"The Applicant (Defendant) did not furnish this honourable court with material evidence as to why the court's discretion should be exercised in his favour and accordingly denied bail".

The Judge however ordered for accelerated hearing of the case and adjourned till 9th of July, 2019 for further hearing. The accused person is to remain in Mandala prison pending the hearing and determination of the matter.

The herbalist reportedly sent several documents, which he claimed emanated from the NNPC and had the names of some top government functionaries like, the GMD of NNPC, Dr. Maikanti Baru, Special Adviser to the President on Media and Publicity, Mr. Femi Adesina, National Commissioner with the Independent National Electoral Commission, Mrs. Amina Zakari, among others in order to defraud a Korean National.
Tags
NEWS