Where in history are we going to find your name? RMD fires back at critic 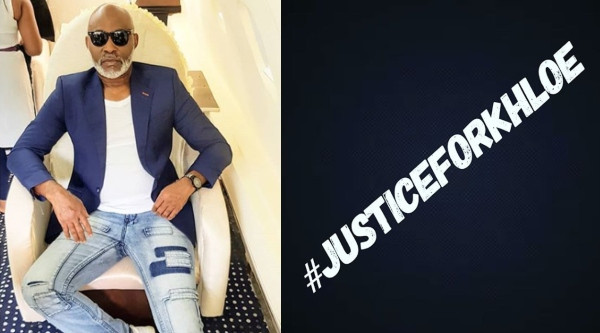 Richard Mofe-Damijo a.k.a RMD engaged in a banter with a follower who accused him of not speaking up against the suspended RUGA settlement but leading a campaign for 4-year-old Khloe who was raped by her parents' cook.

The veteran actor had written an open letter to the Federal Capital Territory's Commissioner of Police, Bala Ciroma, under whose watch Khloe's abuser was released and let off police's hook. His post read;

AN OPEN LETTER TO FCT CP.Dear CP Bala Ciroma, I am hearing rumours that nearly 3 years ago, in your jurisdiction, a full grown man Mr IDRIS EBILOMA allegedly raped a 4 year old child. All rapes are evil, damaging and unforgivable but the rape of a child? That in itself is not only the worst form of rape but one of the most heinous crimes anyone can commit but more disheartening than the crime itself is the allegation that the police is frustrating efforts to get this innocent child the justice she so badly deserves.
With the increased spate of insecurity, abuse of personal freedom (especially by SARS) and now rape. The police cannot play ostrich and pretend to be unaware of the mood of the nation. What better time and what better way to prove that the police is indeed our friend by ensuring that the investigation and evidence(s) presented to the court are thorough and an iron clad case made against the offender.
Sir, I have never met you but I hear that you’re a good man and I am going by that assumption which is why I am writing you this open letter, hoping that the power of social media will lead it to you and trusting that you will live up to your reputation and use your noble office to get KHLOE the justice she deserves, that way she grows up having great hopes in our law enforcement and judiciary. Sir, CP Bala, we are rooting for you to write your name in gold in Nigeria’s history by being the one who made it happen.
Kind Regards,Richard Mofe-Damijo. 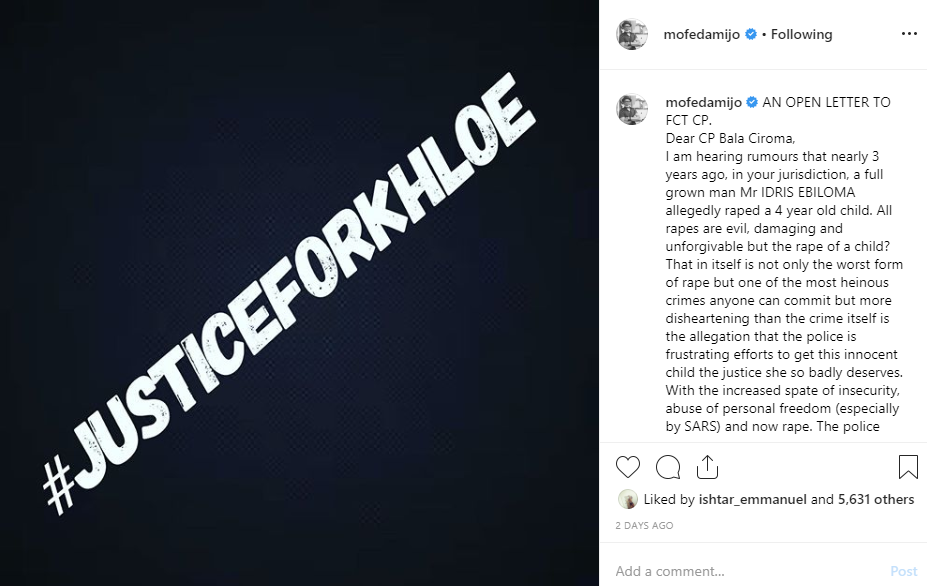 A follower who reacted to the post threatened to start hating on RMD for leading a campaign on a societal ill which wasn't in his interest. He wrote;

@mofedamijo how many times did you write about RUGA abi is not your business? Killings in Nigeria is not your business? Have I seen you write about it. RMD i like you but pls don't make me hate you for this write up. As buhari is yet to appoint ministers and nobody is writing about it . The Senator said he is sorry. Let buhari come out and apologize for the killing of Nigerians let's see. Buhari want to B for RUGA but the federal roads are bad. Economy is rubbish people travelling outside the country everyday 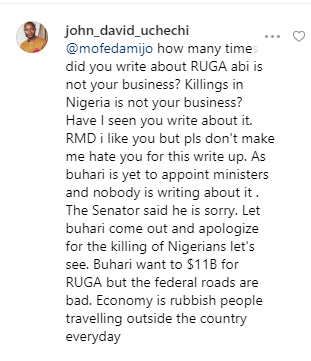 RMD who fired back at his critic, stated that he does not have to write or speak about everything. The actor also wondered where his young critic has been when other young people are leading protests, convening sensible movements and creating value. He wrote in response;

@john_david_uchechi I honestly do NOT care if you hate me or not but before speaking unintelligently do your research. If you had been sensible enough to go through my posts, you’d have seen that the post before this one is about RUGA but why waste my breath on someone who obviously has no capability to intelligently look before speaking!
@john_david_uchechi...and PS: I do not have to write or speak about everything. You, what have you done? What protests have you led? What impact have you made/are you making? Are you aware of how many young people are leading protests, convening sensible movements and creating value? Where in history are we going to find your name? #ThinkOnIt 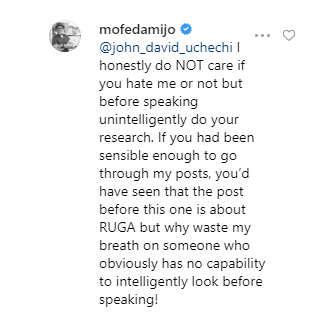