Photo: Thief nabbed in Benue after carting away offering money at Dunamis Church 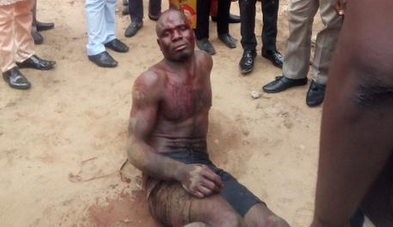 A suspected thief was pursued and caught after he carted away offering money on Sunday morning at a Dunamis International Gospel Centre, in Makurdi, Benue State.

The suspect, identified as Terkaa Tsamber, was said to have tip-toed into the church office while the third service was ongoing in the main building and stole the money collected as offering from the first and second service as well as other valuable items worth thousands of naira.

But luck ran out on him, when a little girl from the children church spotted him and raised an alarm which attracted worshippers who chased him after he scaled over the church fence to hide himself in a residential house near the premises.

The suspected thief was said to have also threatened the little girl with a gun while he tried to run away just as he did to those who pursued him but he was caught when they discovered he did not have any bullet in his gun. 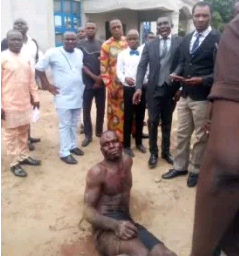 Resident pastor in charge of the Dunamis branch, Pastor Joseph Idakwoji, said it was few minutes into the third service when he heard some members of the church shouting and screaming at the thief.

“Few members who went after him, caught him and brought him to the church. The boys wanted to apply jungle justice on him but I prevented them and called the police who came and picked him to the station,” he said.

Idakwoji added that he discovered on Saturday morning that his office was burgled after the previous Friday worship and suspected that burglars must have made away with items including handsets, offertory, packs of five alive and stabilizer.
“So, I prayed, laid curse on them and anointed the entrance they came through. It took the intervention of the boys in the area and some members of the church to arrest the thief.” he said

It was gathered that the suspect, appealed to the pastor not to let the mob kill him, saying that he regretted his action and would never steal again if let out of the hook.

The police spokesperson in the state, DSP Sewuse Anene, who confirmed the incident, said that the suspect was in the command’s custody after he escaped being lynched by a mob.

Anene said the suspect belonged to a gang of boys who specialised in breaking into houses while the people were in church to steal valuables. The suspect was said to have stolen from a building close to the church and also entered the church office to steal before he was caught and handed to the police.
Tags
NEWS