"Pastors are humans. Ladies should stop dressing indecently to church"- Nigerian lady blames women for increasing rate of immorality in the society 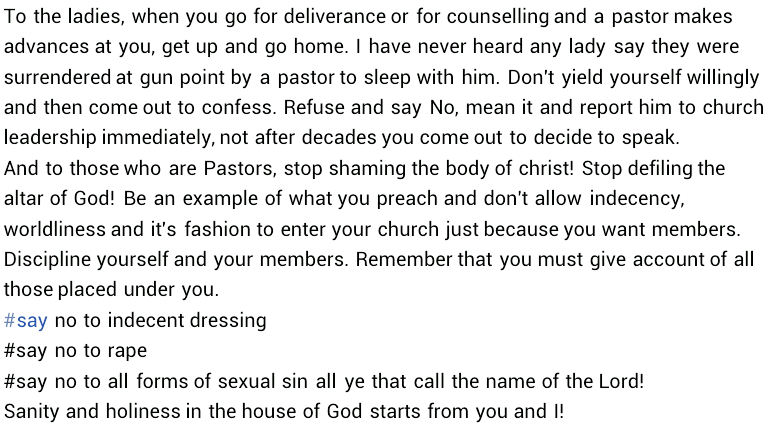 A Nigerian lady Grace Amarachi has said that women are partly the cause of the increasing rate of immorality in the society.

All of us are angry against sexual immorality especially when it happens in the church. You're a lady and when you're being sent back by ushers from the church for dressing indecent, you flare up in anger and stops attending the the church. You're one of our problems! Women are partly the cause of the increasing rate of immorality in the society.
Pastors are humans just like you and are, same Christian just like every one of us, ladies should stop dressing indecently to church in the name of fashion! Stop standing as a temptation to men of God.
Rape is a sexual sin, and so is fornication, masturbation, homosexuality, lesbianism and adultery. If you call the name of christ desist from this any form of sexual sin, it is the only sin according to the Bible against your own body.
If you go to church and yet still fornicate or sleep with single men or ladies while married, you're also defiling the church of christ and should repent today. There are also those whose business is to sleep with pastor's, repent today, confess your sins and return to christ.
Many persons woke up from the bed of adultery and fornication and jump out to throw stones at the said pastor. When you talk against fornication, same persons who go to church every Sunday will jump out to attack you but yet they have strength to attack another.
You're not exempted because you're a member and not a Pastor. Pastors are same as you with same blood running in their veins. Flee from rape, fornication and adultery. I will never support any form of sin nor a rapist but the Bible said "let him who is without sin be the first to cast a stone".
Rapists will surely face the law and suffer for their evil against minors, but remember there is a final judge who will judge everyman. If you have ever engaged in raping anyone or defiling a minor, confess now and ask God and who you offended for forgiveness even if it happened years ago. Yes, you know yourselves, most of them are still angry at you, go and seek for forgiveness from God and those you defiled.
To the ladies, when you go for deliverance or for counselling and a pastor makes advances at you, get up and go home. I have never heard any lady say they were surrendered at gun point by a pastor to sleep with him. Don't yield yourself willingly and then come out to confess. Refuse and say No, mean it and report him to church leadership immediately, not after decades you come out to decide to speak.
And to those who are Pastors, stop shaming the body of christ! Stop defiling the altar of God! Be an example of what you preach and don't allow indecency, worldliness and it's fashion to enter your church just because you want members. Discipline yourself and your members. Remember that you must give account of all those placed under you.# say no to indecent dressing#say no to rape#say no to all forms of sexual sin all ye that call the name of the Lord!Sanity and holiness in the house of God starts from you and I! 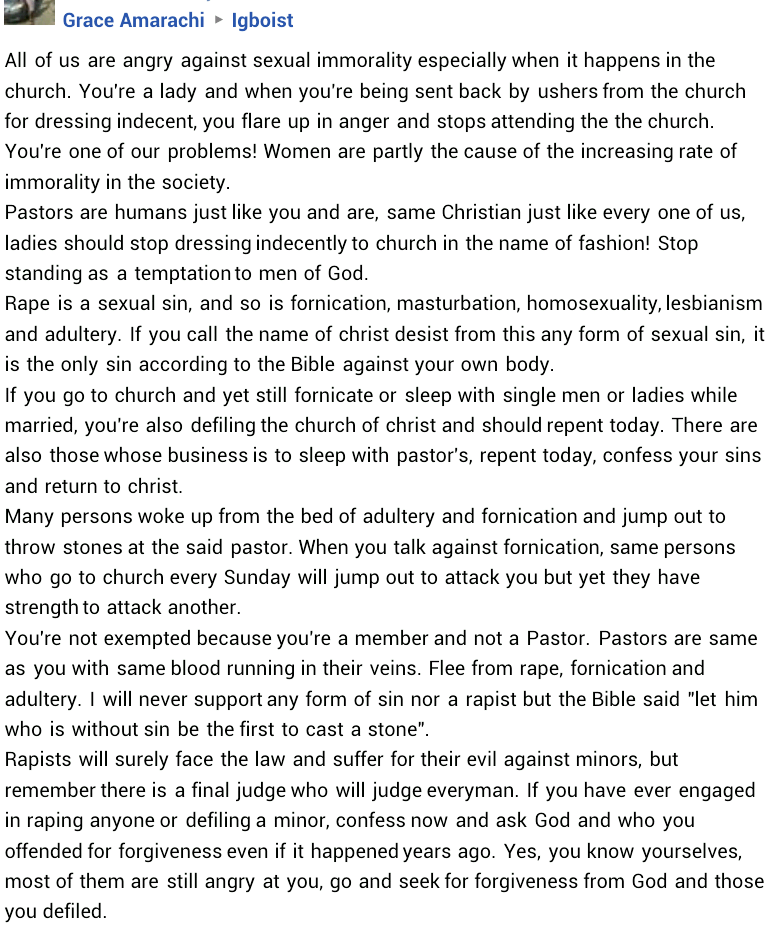