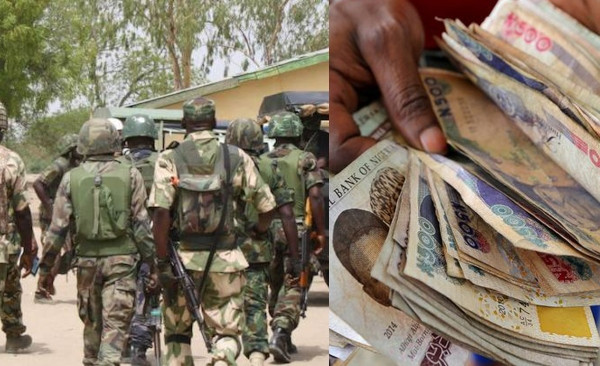 The incident occurred on July 11, and Premium Times reported that the VIP they were escorting was Hakeem Otiki, the general officer commanding, 8 Division of the Army, based in Sokoto. The soldiers had refused loading the money into a military jet that was supposed to airlift it to Abuja, after they escorted the cash from Sokoto to the Nigerian Army airstrip in Jaji, Kaduna State. The money was conveyed in a Buffalo gun truck and a white Toyota Hilux truck which Otiki was in.

The five uniformed men that absconded with the money have been identified as Gabriel Oluwaniyi, a corporal; Mohammed Aminu, a corporal; Commander Haruna, a lance corporal; Oluji Joshua, a lance corporal; and Hayatudeen Abubakar, a lance corporal. Before being moved to Sokoto after Otiki was transferred to head the 8 Division in March, the soldiers were detailed from the Nigerian Army Infantry Corps Centre, Jaji, where the robbery victim was once a commander.

“They also removed all their uniforms and abandoned their rifles in the vehicles at the air strip in Jaji,” a top military source said.
“But after spending a long time handling transactions for them (senior officers) while they (soldiers) remained in penury, they decided to take their destiny into their own hands with the latest opportunity,” another officer confirmed.

“The soldiers acted in a breach of trust. However, this is the outcome of soldiers seeing huge financial transactions being carried out by their principal but were not taken care of financially themselves. The soldiers have decided to abandon military work in order to settle down with the money.”

The bank accounts of the suspects who allegedly stole billions in cash have been frozen, and their last known locations have been identified with a geolocation equipment following an aggressive manhunt that was launched.
Tags
NEWS