#JusticeforKhloe: ''If it were my daughter, I would have killed you'' Tonto Dikeh tells 40 year old man accused of raping 4 year old Khloe (video) 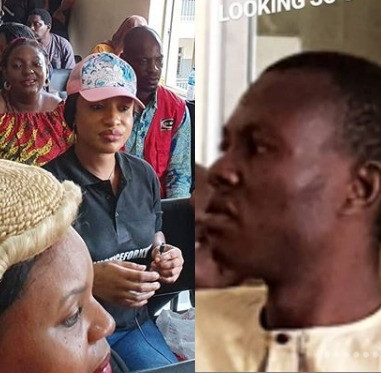 40 year old Idris Ebiloma accused of raping a 4 year old girl, Khloe in 2016, was arraigned before the High Court of the FCT today July 5th.

Actress Tonto Dikeh who brought the case to limelight last week, was in court alongside other Nigerians to demand that Idris be handed a life sentence as there were rumors he might be released today.

Tonto Dikeh was so enraged when she saw Idris covering his face in court that she moved towards him and told him if it were her daughter that he raped, she would have killed him.

Tonto via her Instastories revealed that the father of the victim is the one paying the legal fees of the suspect, Idris.

Idris's legal team are putting up a defence that the mother of the victim framed him up because he was informing the father of the victim of her flings with other men. In a video posted by Tonto, one of Idris's legal team, a female, said the victim was brought to court to identify Idris as the one who raped her but she couldn't
According to Tonto, the matter has been adjourned till October 3rd for both counsels of the plaintiff and the defendant to come with more evidence.

Watch videos of Tonto challenging Idris in court below