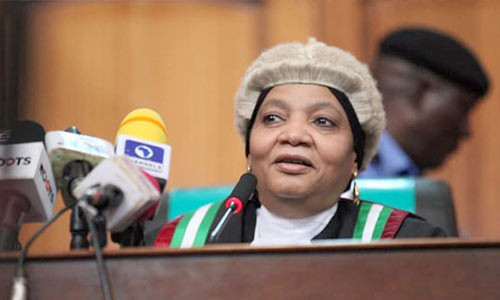 This year’s Annual Justices vacation for the Court of appeal Justices, has been cancelled by Justice Zainab Adamu Bulkachuwa, President of the Court of Appeal.

In the press statement the media officer for the Court of Appeal Mr Saadatu Musa sent out, Justice Zainab Adamu Bulkachuwa cited the "enormous petitions the Court is faced with, 2019 being an election year" as reason for the cancellation.

The 2-page circular which communicated the directive to the judges of the court, revealed that 65 election petitions relating to the last governorship, state House of Assembly, National Assembly and presidential elections had so far been either dismissed or struck out, while 735 were pending before 77 tribunals sitting across the country.

Presiding justices of the various divisions of the court, were asked to draw up a roaster to enable “the justices with medical appointments or other pressing family issues to travel for not more than 15 days within the period.”

“In divisions with three justices, only one justice can travel at a time and the office of the President of the Court of appeal is to be immediately notified to form a panel in that justice’s absence should the need arise,” the circular further directed.
“According to Justice Bulkachuwa, appeals arising from the National and State Assemblies would be heard by a local panel of three members, except where it is controversial, then the president will constitute and send another panel to hear it.
“On the governorship appeals, the president of the Court of Appeal disclosed that it would be heard by a five-member panel to be set up by his lordship.
“Hon. Justice Bulkachuwa, therefore, instructed the presiding justices to notify her as soon as appeals from governorship elections were filed to ensure their speedy determination" it added.