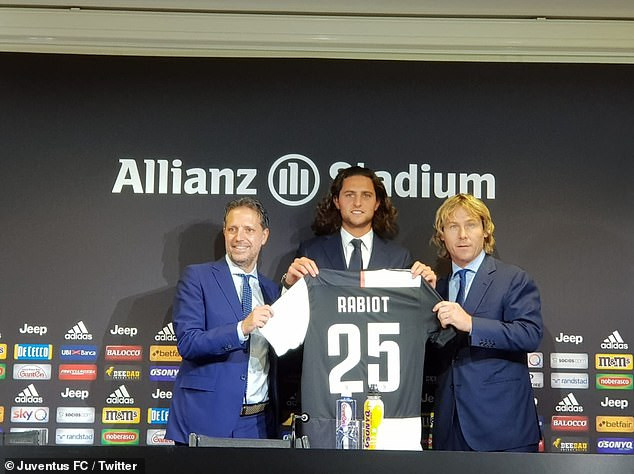 Italian champions, Juventus have completed the signing of Adrien Rabiot on a free transfer from Paris Saint-Germain after running down his contract at the French club.
The 24-year-old French midfielder put pen to paper on a deal reportedly worth million per year plus bonuses and a m signing-on fee.
Rabiot, who was placed in exile in Paris after refusing to commit to a new deal said on Tuesday: 'The last few months have been complicated both from a sporting and personal level, but today I am ready to leave everything behind and begin a new adventure.'
Rabiot had been linked with a number of clubs around Europe, including Manchester United, but opted to move to Juventus after admitting Gianluigi Buffon and the lure of playing with Cristiano Ronaldo convinced him.
He added: 'Now was the right time for me to come here, and that's why I'm here. I have to tell you that in the past season I talked a lot to Gigi.
'We had the opportunity to talk and he gave me lots of suggestions and advice. Of course, we talked a lot about Juventus, he knows the team and club very well.

'Obviously he was the best person I could talk to about this. His opinion matters a lot to me because Gigi is a person I had a great season with, also from a personal point of view as he is a friend of mine, so certainly he played a role too.
'He told me lots of interesting things about Juventus, that if I wanted to make further progress in my career, they would be the best way to achieve that.
Certainly, they have a great added value compared to other clubs, so I took this advice very seriously.
'I often listened to him because he offered great advice. He made me think [about Juve] carefully and was persuasive.
'Ronaldo is also a great champion, as are many others, so obviously that played a role in my decision too.'
Tags
SPORTS