'I have nothing to fear' - Bukola Saraki replies EFCC 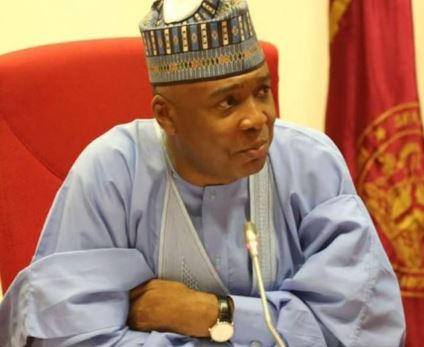 Former Senate President, Bukola Saraki, has said he is innocent of the allegations of fraud levelled against him by the Economic and Financial Crimes Commission (EFCC), he also said he is not engaged in any media war with the anti-graft agency.

EFCC had in May marked some properties saying it believed Saraki purchased them from the Presidential Implementation Committee for the Sale of Government Properties through shell companies. In a recent allegation, the EFCC also accused Saraki of taking N12 billion from the treasury of the Kwara State Government while he was governor of the state between 2003 and 2011. The commission said the money was withdrawn in cash.

The money, EFCC said, was allegedly used by Saraki to offset the N1.36 billion bank loan he used in purchasing homes at 15, 15A, 17, 17A and four flats on Macdonald Road, Ikoyi, Lagos, hence, its decision to seize the properties. The agency, in a statement on Sunday, said no amount of “media campaign” against its acting chairman, Ibrahim Magu, will stop the prosecution of the former All Progressives Congress chieftain.

In his reaction, Saraki addressed some of the allegations on Monday. In a statement by his Special Adviser on Media and Publicity, Yusuph Olaniyonu, the politician said he has not engaged in any media war ”but has rather been the one at the receiving end of the media onslaught sponsored from the office of the EFCC”.

He said that various documents and court processes from the agency had been given to a newspaper for publication.

“While the EFCC distributed copies of its letter to the Chief Judge of the Federal High Court immediately it was submitted, we are still surprised how Dr Saraki’s response written early May found its way into a newspaper last Sunday.
It should be known that if we were interested in leaking the letter, we would not wait for seven weeks to do that. Dr Saraki believes he is on firm ground on the points of law and has nothing to be afraid of. He is innocent of the charges.
“We need to reiterate that Dr Saraki is not interested in obstructing any investigation by the EFCC or any security agency. While the EFCC claims that it is investigating the Office of the Senate President between 2015 and 2019, we make bold to say that it is just on a wild goose chase.
That Office has nothing to do with contract awards and handling of the finances of the National Assembly. These are functions of the bureaucracy of the National Assembly, otherwise known as the National Assembly Management,” part of the statement read.

Olaniyonu said all the issues the EFCC are presently raising were ”the same issues that are contained in four of the charges filed before the Code of Conduct Tribunal (CCT) and taken before the Court of Appeal and the Supreme Court”. He said since the issues have been determined by the courts up to the Supreme Court, ”the EFCC is just on a persecution and smear campaigns with its current investigations”.

“At the time the CCT charges were filed, it was generally believed some of the charges should not have been lumped up with the asset declaration issues.
However, in their desperation to nail Dr Saraki, some of the charges that contained insinuations that Kwara State funds were paid into accounts owned by him and companies in which he has interests were filed. And twice, the charges went before the highest court in the land, and he was discharged and acquitted,” he said.