Graphic: Man kills prostitute, planned to use her vagina for ritual 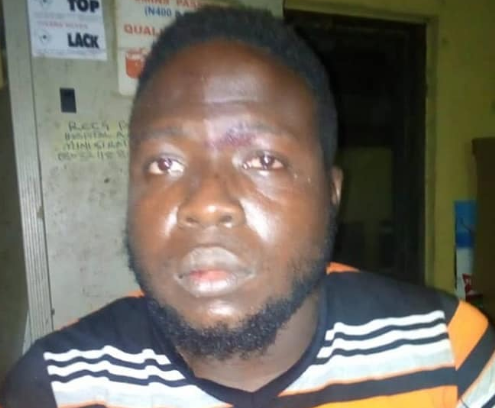 The Lagos state police command have arrested a man simply identified as Bidemi, for stabbing to death a prostitute he brought to his house in Corporation Estate, Mile 2 Lagos state to have sex with but ended up killing her.

According to reports, Bidemi who lives alone, came home last night with the lady at about 11pm. His neighbors saw them enter his house and moments later, they heard the lady crying for help.

The neighbors alerted the estate security of the call for help that was heard coming from his apartment. Shortly after, Bidemi walked out and was about leaving the estate when security men asked him for the whereabout of the lady he came in with earlier and he told them she was inside his house. They informed him that they heard her cry for help and that they will like to see her. Bidemi initially hesitated, saying all was well between them.

Seeing that the security men and his neighbors were not buying his explanation, Bidemi was forced to take them to his house where they found the lady in a pool of her own blood with her vagina cut out. Upon inquiry, Bidemi confessed to have cut out her private part, saying that he needed it for ritual purpose.

He was then handed over to men of the Amuwo Odofin police station. See graphic photo of the deceased below