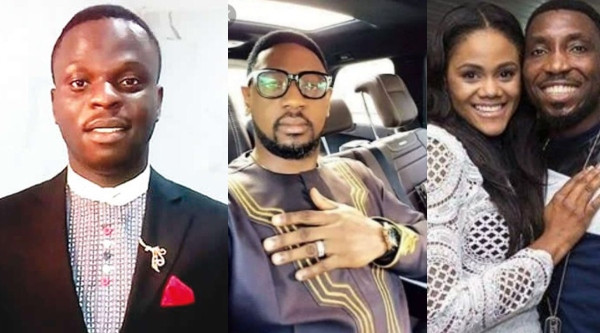 Pastor Chris Omatsola whose sex tape with his lover, Princess Tamaratokoni Okpewho, went viral after it was leaked in 2018, has backed the decision of the founder of the Commonwealth of Zion Assembly, Pastor Biodun Fatoyinbo, to step down over the rape allegation.

The Senior Pastor at Zionwealth Church, disclosed that he believes the rape allegation against Pastor Fatoyinbo by Busola Dakolo is true. He further advised the COZA founder to seek God’s face for mercy and return to ministry.

Recounting how he consulted Fatoyinbo at his Abuja church during his sex-tape scandal and how the latter counselled him for over two hours, he stated that although Fatoyinbo was his senior in ministry, he (Omatsola) had called to reciprocate what he did for him at his own trying time.

“I went to see him (Fatoyinbo) and we discussed for over two hours. What he suggested to me then is what he is doing right now. Stepping down is the right thing to do. Honestly, I believe Busola’s story. She cannot come out to lie against him. What for? Is it for money or fame?
“Busola and her husband, Timi Dakolo, are already famous and have money. I believe she did it for conscience sake and to help other people. I advise that he (Fatoyinbo) should get himself together and push up again; it is not the end of life and (his) ministry. He should not sink into depression. He should get things right with God.
“He has taken the right step by stepping down so that it does not appear like he took the allegation lightly or that he mocks Christianity. He should go through a psycho-therapy process and heal up and he should give all the necessary legal attention to the case.”
He added, “I do not support rape or violence in any form and I believe her story. I pray that God will heal her heart and wound.”

Also speaking on how he settled his sex-tape scandal, Pastor Omatsola said;