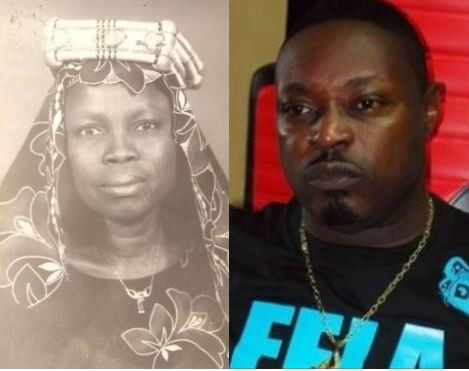 Veteran Nigerian rapper, Eedris Abdulkareem has lost his mother, Alhaja Safurat Ajoke Ajenifuja who passed on at the age of 96.

In a touching tribute to his late mum who died on Friday, Eedris wrote, 'my mother, confidante, role model and prayer warrior, Alhaja Safurat Ajoke Ajenifuja has joined the saints'.

See his full tribute below...

"One of the most indelible marks of attachment and bond between me and my mother happened while I was very young! We had a neighbour in whose house we used to watch television, which was a rare sight those days in my neighbourhood!
One fateful day, the owners of the house chastised me in strong words, telling me to go home and tell my father to buy a television set: I ran home feeling humiliated and abused. After a while, I ask my mother about my father whom I didn't know, my mum burst out crying in The course of explaining this to me. I felt that I have caused my mother some untold pains and involuntarily joined her in crying!"
My mother, confidante, role model and prayer warrior, Alhaja Safurat Ajoke Ajenifuja has joined the saints.
A virtuous, prayerful, compassionate and caring Mother, a mother of all Seasons and a mother of all is gone. Alhaja transitioned into glory on Friday, July 12, 2019 at exactly 10:35 pm, aged 96.
An Abeokuta, Ogun State born and bred Amazon who teamed with the legendary Fumnilayo Anikulapo Kuti in the struggles and sexiest tax regimes of the day that necessitated the abdication of the Egba Throne by the then Oba Adewole the 2nd in 1949, Alhaja was a collosus in the areas of human rights activism and the fight for the betterment of the society!
A philanthropist of no mean repute who spent most of her life in the ancient city of Kano where she became a caring Mother to so many indigent children!
My mother who vehemently refused to be cowed by the vagaries and vicissitudes of life, having lost eight (8) out of her ten (10) biological sons, trudged on despite all in order to make me the man I am today.
She taught humility without foolishness, truthfulness without fear or favour, charitable and communal living devoid of aloofness and self adulation, unfettered love of All human kind irrespective of religious, tribal and political leanings.
My mother was a woman amongst women! She was my Pathfinder, strength and solace in the times of trouble.
When it became difficult at a point for me to continue my education, Alhaja resorted to selling pepper soup so as to aid my education; I started Soaring early enough because of her support and training.
People talk about my Fearlessness and activism without knowing that most of these attributes are in born, I practically inherited most of my legendary steadfastness from my dependable and incorruptible Mother, who was the also the most prayerful person I have ever met my life.
Alhaja, an Egba thoroughbred from Abeokuta, Ogun State, was buried according to Islamic rites on Saturday at Atan Cemetery, Akoka, Lagos State, amidst family, friends, well wishers and the clergy amongst others.
As we give thanks and Praises for a worthy life well lived to the Glory of God, I want to use this opportunity to thank and appreciate the numerous family and friends who trooped out to give my mother and rock, Alhaja Ajenifuja a worthy farewell!
May Allah reward you all with unalloyed love and guidance for standing with me and my family in this trying times.
More information to be released later!
May Alhaja Safurat Ajoke Ajenifuja's love filled soul Rest in Perfect Peace at the Bossom of the Lord...Amen
Eedris AbdulkareemFor the Family