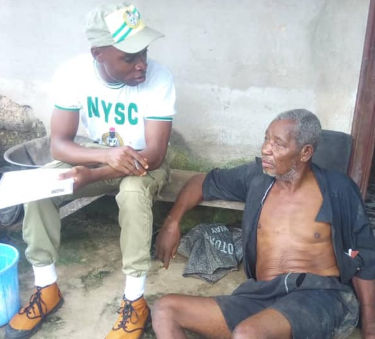 Some Corps members serving in Odi, Bayelsa state have warmed the hearts of many with their amazing act of kindness towards the old man pictured above.

Adigun Ayinla, who is one of the corps members, said the old man was abandoned by his wife and seven children after he had a stroke. The corps members contributed money, visited his home, cleaned it up and gave him some food.

What a world! The old man was abandoned by his 7 children and wife because he is a victim of stroke but God in his infinite mercy, we were able to locate him and render to him our own token support as charity sub CDS is concern.

See more photos showing them performing their kind gesture below.