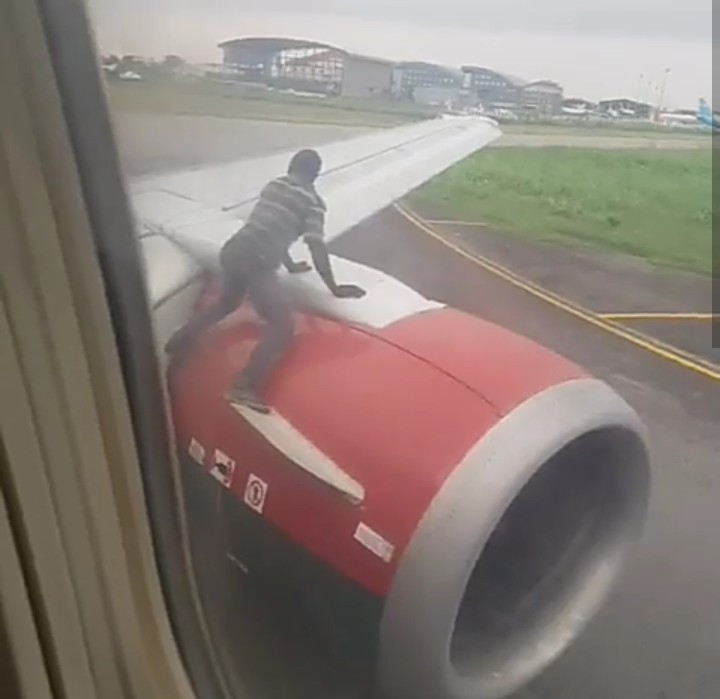 Passengers on a flight about to take off from the Murtala Muhammed International Airport in Ikeja, Lagos, received a shocker when an unknown man exited the bush with a bag and climbed on the plane engine.

According to Amb. Otto Orondaam, the unknown man ran to the plane as it was taxing on the runway just before takoff. The pilot was forced to stop the plane when he sighted the man.

The unknown man, suspected to be a stowaway because of the gloves he was wearing and his bag, ran to the plane and climbed onto it, then put his bag into the engine as horrified passengers watched.

His actions held up the plane for about 30 minutes before authorities showed up and apprehended him.

Guys this is an emmergency o. For 30 minutes we have been stuck at the runway at MMIA by an unidentified man who ran to the aircraft with a bag. Security has not showed up and everyone is panicking. I have so many questions to ask but right now I can't even breathe. Pls share this to all relevant authorities.Dear Nigeria!!!!! Update: He has finally been apprehended and we've all disembarked from the flight. FAAN authorities showed up 23minutes into the scene but were scared to approach him. Security eventually shows up after 37mins. ______How it happened!! So our flight was taxing on the runway and about taking off when this man shows up running towards the moving aircraft from the bush. The pilot and a few passengers spotted him running towards the aircraft and the pilot immediately slowed down and quickly put off the engine. The guy approaches the plane with gloves and starts walking around and under the aircraft holding a bag which he dropped inside the engine. Thanks to the Pilot of the Azman Airline for quickly observing and taking swift action.. I still have a million and one questions to ask cos anything could have gone wrong! Nigeria will work perfectly someday. This I know.