BiodunFatoyinbo: I have never felt more proud of my crazy self- Ese Walter

Ese Walter, the lady who in 2013 revealed that she allegedly had sexual relations with clergyman and founder of COZA, Biodun Fatoyinbo, says she is very proud of her crazy self.

Recall that when Ese released her tell all statement of how the clergyman allegedly manipulated her sexually, many bashed her for accusing a ''man of God'', and termed her crazy.

With the explosive interview released yesterday, June 28, in which singer Timi Dakolo's wife accused Fatoyinbo of raping her multiple times, many Nigerians stated that Ese has now been ''vindicated''.

Reacting to comments from Nigerians, Ese via her Facebook page, wrote

Here’s to the crazy ones.
The misfits.
The rebels.
The troublemakers.
The round pegs in the square holes.
The ones who see things differently.
They’re not fond of rules.
And they have no respect for the status quo.
You can quote them, disagree with them, glorify or vilify them.
But the only thing you can’t do is ignore them.
Because they change things.
They push the human race forward.
And while some may see them as the crazy ones, we see genius.
Because the people who are crazy enough to think they can change the world, are the ones who do.
Apple Quote.
********************************************
I am one of the crazy ones and today I have never felt more proud of my crazy self.
I didn't do anything because I was brave, I did because I was naive and today I find that even naive is ok. The Universe is alligning for my Boobclan
Just in time for #crestgratitudechallenge
Welcome to my Ted talk
Good morning from here 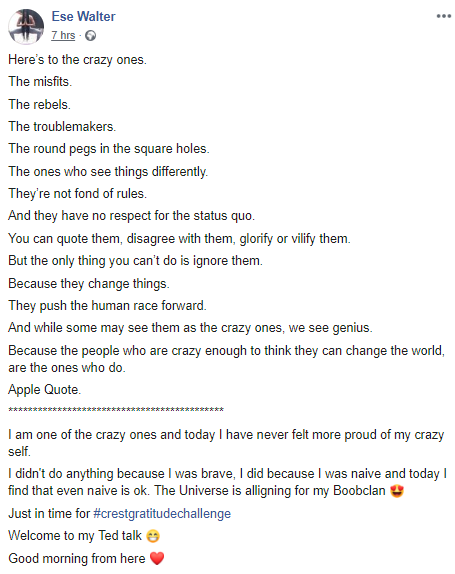