At least 20 people, most of them students, have been killed in a fire accident which broke out at a coaching centre in Surat, Gujarat, republic of India on Friday.

Reports have it that most of the students that lost their lives, died either due to suffocation or by jumping off the building to escape the inferno.

In a video of the incident, some young students at the Takshashila Complex in Sarthana area, where the building is located, can be seen jumping off the third and fourth floors amid plumes of thick smoke. At least 70 students were inside the building when the fire broke out.

The fire started near the staircase, so they could not get down,” Joint Commissioner of Police Harikrishna Patel said, adding that all the dead were aged below 20 years.

Nineteen fire tenders and two hydraulic platforms were pressed into service to douse the fire and rescue those stuck inside the building, said an official of Surat fire control room.

The fire was doused within an hour. No safety equipment was reportedly installed in the building, added the official, IndiaToday reports.

The fire was reportedly triggered by a short circuit. An FIR has been registered against three people, including the builders of the complex.

They have been identified as Harshal Vekaria and Jignesh. The owner of the coaching centre, Bhargav Bhutani, has also been detained.

While Gujarat Chief Minister Vijay Rupani said at least 19 students died in the fire, his deputy Nitin Patel put the figure at 20.

“As per the information received, 20 students have died in the fire. Many others were injured and shifted to a hospital,” Patel said.

Expressing anguish, Prime Minister Narendra Modi said he has directed the state government and local authorities to provide all possible assistance to those affected. 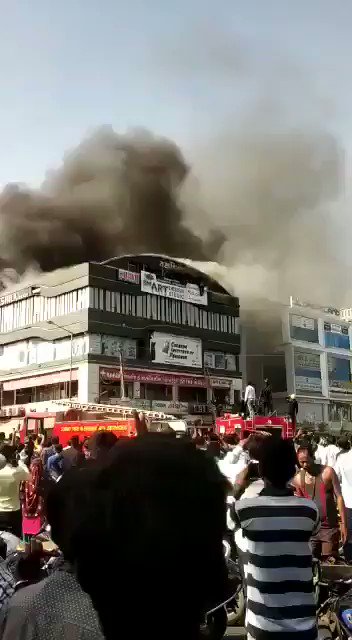