Photo: Nigerian man jailed for pretending to be a white woman to defraud a white man 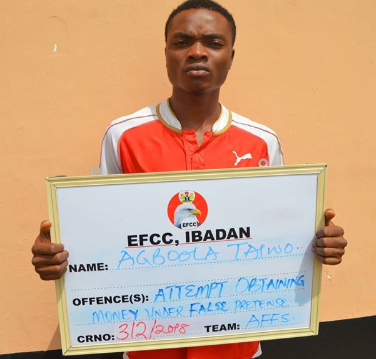 Justice Watilat Ibrahim of the Federal High Court 2, sitting in Abeokuta, the Ogun State capital has convicted and sentenced one Agboola Taiwo (a.k.a Mary Caesar) to four months imprisonment for an offense bordering on impersonation, and contrary to Section 22(3) (b) and punishable under Section 22(4) of the Cyber Crimes (Prohibition, Prevention Etc) Act, 2015.

The convict, who was prosecuted by the Ibadan Zonal Office of the Economic and Financial Crimes Commission, EFCC, was arraigned in court on December 10, 2018.

The charge that earned Taiwo jail, reads: “that you Agboola Taiwo (a.k.a Mary Ceaser) sometime in November, 2018, at Awa-Ijebu, within the jurisdiction of this honourable court, fraudulently impersonated by presenting yourself to be Katherine Bishop, a white female via your mail sent to one James, a United States of America citizen through your email address: lonelydiva2k18@gmail.comand thereby committed an offence contrary to Section 22 (3) (b) and punishable under Section 22 (4) of the Cyber Crimes (Prohibition, Prevention Etc) Act, 2015.
He pleaded guilty and opted for a plea bargain, prompting the prosecuting counsel, Mabas Mabur to pray the court to convict him accordingly.He was convicted and sentenced to four months jail term by Justice Ibrahim with effect from the date of arrest.
The convict also forfeited his two phones to the Federal Government of Nigeria, being part of the proceeds of his fraudulent act.
Tags
NEWS